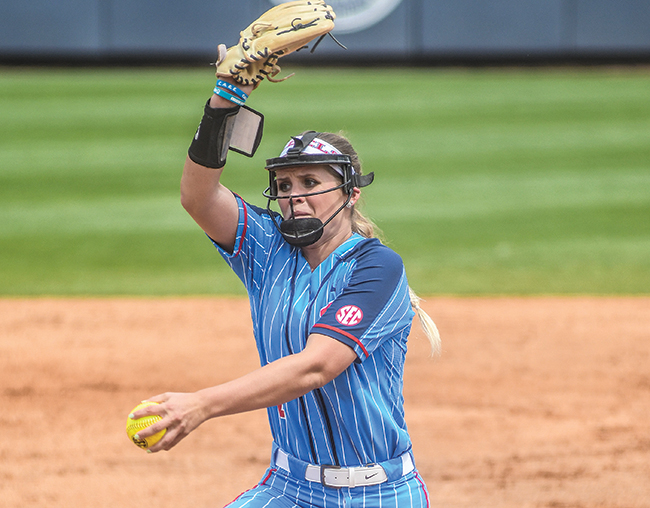 The Ole Miss softball team was overjoyed Sunday night after finding out they would be hosting the team’s second-ever regional in school history.

Now just five days later, it’s all coming together. The Oxford Regional will get underway Friday afternoon. Going into a long weekend of at least six, possibly seven, softball games, the Rebels have high expectations as the No. 11 overall seed.

#OleMiss softball is hosting a regional in Oxford. An 11 seed, they’ll get under way Friday night. pic.twitter.com/bUpVwLTJdd

While just the second time hosting in program history, some of the Rebel seniors have been here before. Kylan Becker and Autumn Gillespie are two members of the Ole Miss squad who were there in 2017 when the team hosted its first regional. In a way, it comes down to them to get the other girls ready for an atmosphere that will be a little beyond what they have seen to this point.

Gillespie is a junior. She’ll be back playing in Oxford no matter what. But For Becker, this weekend is likely her last in the Ole Miss Softball Complex. It’s something that’s been on the back of her mind all year, she said – the opportunity to come home for one final series.

“I’ve been telling them since the middle of the season that we needed to get some big wins because I wanted to host a regional. People don’t really understand how important it is for seeding to get those wins,” Becker said. “I would just keep telling them that hosting is the best feeling ever and how exciting it is. I want to leave this field hosting. I don’t think they understand what it means yet, but I just told them to imagine the biggest crowd we’ve ever had times three. I think we’re all just excited.”

What to expect from the likely Rebel opponents

Head coach Mike Smith said he expects Chattanooga to play a lot of small ball. Bunting to move runner is going to be a big part of their arsenal, something the Rebels have been preparing for throughout the week. Ole Miss played Chattanooga at home just one year ago, winning 10-2.

The Rebels’ likely day two matchup comes in the form of a 50-win two-seed, Louisiana Lafayette. Smith admitted they were a little surprised to have to face a two-seed with fifty wins, considering they are the No. 11 national seed. The only four losses on their schedule are to North Texas, No. 21 Baylor, No. 4 Oklahoma and McNeese.

“I think we probably should’ve had someone a little different, maybe not a 50-win team,” Smith said. “But it is what it is. To be the best you have to beat the best.” 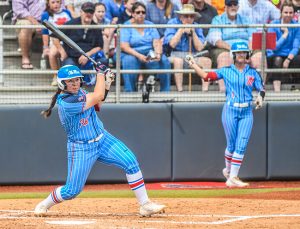 So much of this Rebel team, even those in critical positions, haven’t had this sort of postseason experience or expectations of hosting. Some haven’t even played in the NCAA Tournament. Therefore, Smith and company will be relying extensively on the girls who have been in this position, he said.

“You can’t take anything away from the importance of postseason experience. We’ve got three players that were a part of that. So, being able to have those individuals between Kylan, Kaylee (Horton) and Brittany Finney, those three were here in 2017 and able to experience that,” Smith said. “It’s about using their leadership to really let the others know what it’s going to be like. I know that’s a conversation that they’ve already had with their teammates… We’ve played in front of some big crowds this season so its not something they haven’t experience before.”

One such girl without any NCAA Tournament experience is Ole Miss pitcher Molly Jacobsen. A junior college transfer from Des Moines Area Community College, Jacobsen has postseason experience at the junior college level that she can draw on, but she said she knows it’s going to be quite different come Friday.

“There was obviously some pressure pitching in nationals and the crowd was insane. You had all the Jones County (Junior College) people that were rooting for us to beat LSU-E. It was a huge crowd and I think just the adrenaline and how big the moment was, was awesome to be a part of,” Jacobsen said. “I’m glad I have that under my belt I hope that that’ll help me a little bit with the nerves. But, obviously, it’ll be a lot different. I think we’ll sell out, our fanbase is amazing. I’m just super excited to take the field with the team.”

On the Ole Miss pitching 1-2 punch

As much as winning a regional comes down to team play top-to-bottom, a big portion of it rides on the shoulders of the starting pitchers. Luckily for Ole Miss, they have two stud starters ready to go. Senior Brittany Finney (2.81 ERA) and junior Molly Jacobsen (1.97 ERA) will need to be on their games this weekend if the Rebels are to advance to a super. Smith hasn’t yet announced who will start the opener.

“I think me and Brittany (Finney) both feel the same way. Either way, I’m going to have Brittany’s back,” Jacobsen said. “Whether she starts or anyone else on our staff does. We’re a really close staff. We’ll just stay close and support each other no matter what.”

Here's the full weekend schedule for #OleMiss and the the Oxford softball regional pic.twitter.com/a6iQ1mlAoD

The numbers are impressive enough. To leave SEC play with two starters having ERAs under 3.0 is impressive. Yet the way they pitch in very different styles gives the Rebels a bit of a curveball – or more accurately a rise ball – to throw at these other teams coming to Oxford this weekend.

“I think we’re a great compliment to each other. My game is a lot different than Molly’s,” Finney said. “I throw different stuff than she does and I throw a little bit harder than she does. Whether I start or she does, bringing the other into the game just changes it up completely and really keeps the hitters off balance.”

Ole Miss will take the field in Oxford for the first time this weekend tonight at 6 p.m. If all goes to plan for the Rebels, they’ll play again Saturday with the regional finals starting at 3 p.m. on Sunday afternoon.