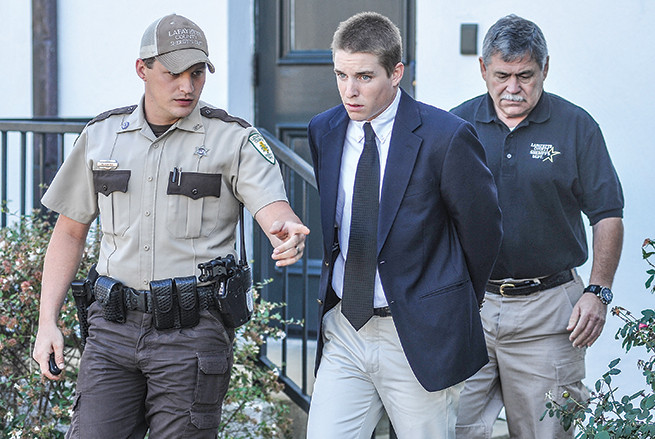 John Strickland Jr., center, leaves the Lafayette County Courthouse after pleading guilty to one count of aggravated DUI in the death of John Wheat, in Oxford, Miss. on Monday, September 23, 2013. Sarah Wheat was also killed in the wreck that took John Wheat's life, but her death was not prosecuted. Strickland received a sentence of 25 years with 13 years suspended. (Bruce Newman, Oxford Eagle)

John Strickland, Jr. was convicted for the deaths of John and Sarah Wheat in 2013, but six years later, he is a free man.

Strickland was released from jail on probation on Tuesday, per the Mississippi Department of Corrections.

Strickland was under the influence of marijuana, prescription medication and a canned air propellant difluoroethane when he crossed over the median into oncoming traffic on Highway 6 and crashed into John and Sarah Wheat’s vehicle in October 2012. The siblings were returning to Oxford after attending a Race for the Cure event in Tupelo that day. They were enrolled at Ole Miss at the time of their passing.

Last year, it was reported Strickland could earn an early release after only serving five of the 12 years. A law that was passed in 2014 requires that those convicted on July 1, 2014 or after must serve 25 percent of their sentence for non-violent crimes and 50 percent for violent crimes before they are considered for early release.

When reached for a comment, MDOC confirmed Strickland had been released earlier this week.

“In addition to the sentencing order, the time he served in prison is based on Mississippi Code 47-5-138 et al,” the statement read. “Therefore, his release is governed by state law. The Mississippi Department of Corrections has no further information to provide.”

Part 6 of the code states that: ‘Any inmate, who is released before the expiration of his term of sentence under this section, shall be placed under earned-release supervision until the expiration of the term of sentence.  The inmate shall retain inmate status and remain under the jurisdiction of the department. The period of earned-release supervision shall be conducted in the same manner as a period of supervised parole.”