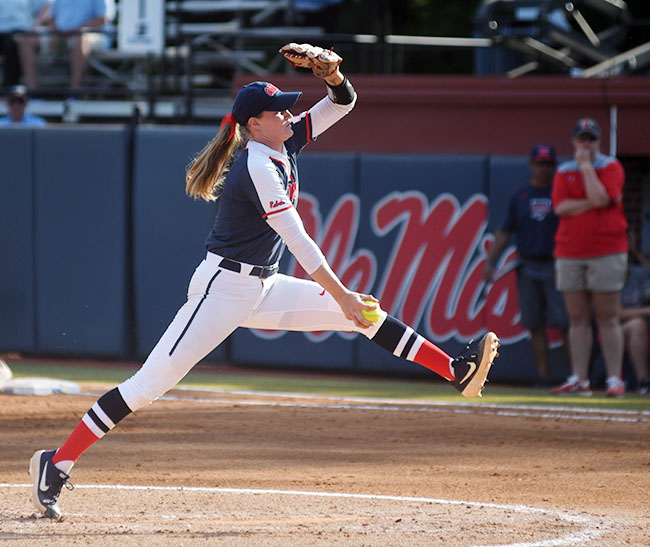 The Rebels totaled just four baserunners in their first game on Saturday at the Oxford Regional, a 2-0 loss to Louisiana. In their second game of the day, an elimination game with Southeast Missouri, they scored eight runs in the first inning alone.

Ole Miss knocked out SEMO from the NCAA Tournament Saturday evening, ending their season, with a 10-0 win to close Saturday action at the Oxford Regional. To advance to the Super Regionals, Ole Miss now needs to beat Louisiana in back-to-back Sunday afternoon games.

Before the first inning had come to close, Ole Miss had chased off two SEMO pitchers. Scoring eight runs in the opening frame, the Rebels recorded five hits against three Redhawk pitchers. Thirteen Ole Miss batters came to the plate in the inning that saw six different Rebels record an RBI. Individually, Abbey Lantham recorded three of those RBIs, including two on a homer in the second at-bat of the game.

“She’s humble. She crushed that ball. That ball was hit a long way,” said Mike Smith, joking with her sophomore at the other end of the press conference table. “That ball was high as well as it was far. She hit it a long way, so stop being humble over there.”

No more runs were scored until the fourth.

The bottom of the Rebel order did the damage in the fourth inning. Amanda Roth went deep to left field in the inning, a two-run shot putting Ole Miss up 10-0. Roth was 2 for 2 with 2 RBIs and a walk in the game.

Like her compatriot before her in the first Ole Miss game of the day, Rebel starting pitcher Brittany Finney was great in this one. Allowing just two hits, Finney held the Redhawks scoreless through her three innings of work.

“(The pitching was) outstanding. They’ve given us an opportunity to win every ballgame,” Smith said. “I’m proud of what these girls have done.”

With the win, Ole Miss advances to their fourth straight Championship Sunday in a Regional. In order to advance to a Super Regional, the Rebels will need to beat Louisiana in consecutive games Sunday.

Expecting they’ll see the same starting pitcher from Louisiana that blanked them 2-0 in the first game, Kylan Becker said she’ll spend the evening going back and looking at what went wrong game one. Adjustments will need to be made for an Ole Miss team that hit Louisiana starter Summer Ellyson just three times in their first meeting Saturday afternoon.

Ole Miss has made the supers just once in program history. Coincidentally, that 2017 trip to the super regional came the last time Ole Miss hosted a regional. The first of the potential two games of the Oxford Regional gets started at 2 p.m. Sunday.

Rebel softball falls to Louisiana in Oxford regional behind…