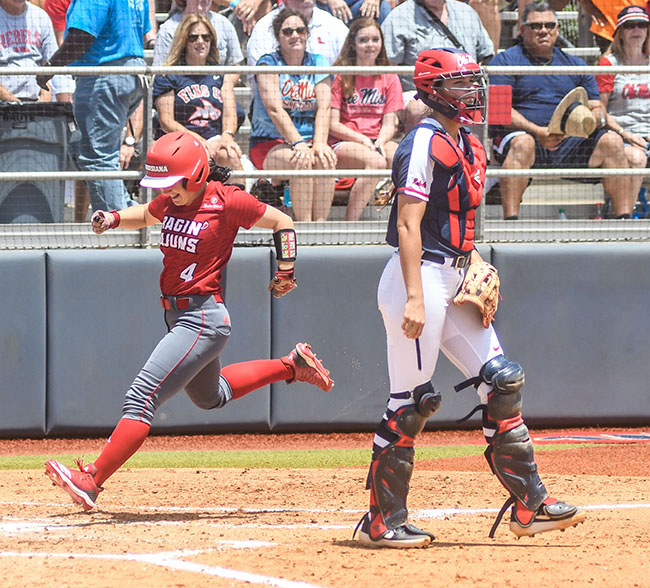 Louisiana-Lafayette's Keeli Milligan (4) scores from first base after Mississippi catcher Autumn Gillespie threw the ball into center field for an error in the NCAA Oxford Regional at the Ole Miss Softball Complex in Oxford, Miss. on Saturday, May 18, 2019. Louisiana-Lafayette won 2-0. (Bruce Newman, Oxford Eagle)

Louisiana starting pitcher Summer Ellyson dominated Ole Miss Saturday in a critical 2-0 win for the Ragin Cajuns. The loss makes the Rebels’ path to the Super Regionals quite a bit more challenging.

“Great day to be a Rebel. Even though we lost the ballgame. I think Molly (Jacobsen) pitched a great day,” said Ole Miss head coach Mike Smith. “At this stage of the game, you have to have every facet of the game to have a chance to win. We didn’t do that today.”

With both Ellyson and Ole Miss starter Molly Jacobsen pitching fantastic, the game simply came down to a pair of poor-IQ softball plays by the Rebels in the third. One play after Ole Miss third baseman Amanda Roth hesitated on a ball hit her way, allowing a second runner on base, Rebel catcher Autumn Gillespie made the game-altering mistake.

On a bouncing pitch that she blocked, Gillespie went to field the pitch up the third base line. In process she walked the runner on third back to the plate, making sure the runner on first remained in her place. Then Gillespie threw a perplexing ball to second. The errant throw went into the outfield, allowing both Ragin Cajun runs to score.

“We were trying to be aggressive. We had the runner going back to third base. Autumn saw that she thought the runner was going to second base,” Smith said. “The throw just got away from her a little bit… I’m not going to fault Autumn for being aggressive.”

For the Rebels offensively, three times they were able to get the leadoff batter on base, in none of those innings were they able to get a second baserunner. 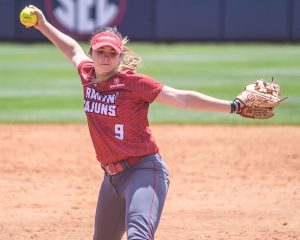 “The fans were great today, both sides,” Ellyson said. “It reminded me a lot of home, and that’s where I feel at best… I knew we were going to perform at a high level today, and it worked out for the best.”

With the loss, the road to the Super Regional gets a lot harder for Ole Miss. By beating Louisiana this afternoon, they would’ve needed just one more win on the weekend to advance. Now, the Rebels need to win again today against either Southeast Missouri State or Chattanooga. Then, they’d have to beat this Louisiana team twice on Sunday to advance.