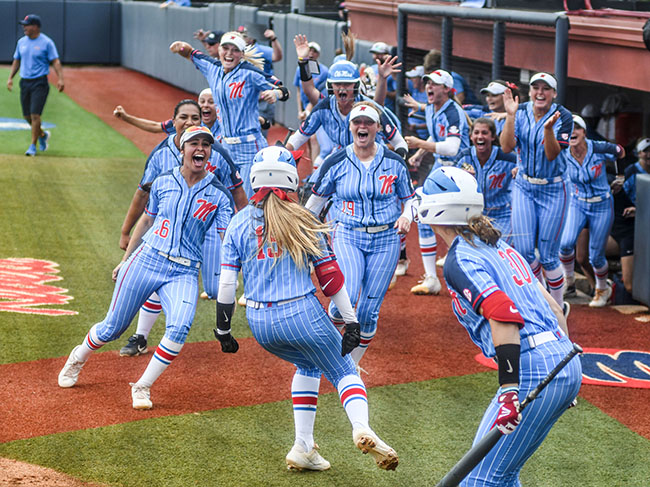 Mississippi players react as Kylan Becker (15) scores on a three base error by Louisiana-Lafayette in the NCAA Oxford Regional at the Ole Miss Softball Complex in Oxford, Miss. on Sunday, May 19, 2019. (Bruce Newman, Oxford Eagle via AP)

Ole Miss came into Sunday needing to beat Louisiana in back-t0-back games to advance to a Super Regional. Right now, half of that battle has been completed successfully.

The Rebels took the first game 5-1 behind a pair of third inning home runs. Forcing the second game of the doubleheader, everything is now one the line. the winner of the final game of the Oxford Regional will advance to Super Regionals.

If one were to pinpoint the Rebel struggles against Louisiana to a single thing on Saturday’s 2-0 loss, it was simple. Her name was Summer Ellyson.

The Ragin Cajuns starting pitcher has been among the best in the country all year. Making her 44th start Sunday afternoon, Ellyson came into the day 39-4 with a 0.98 ERA. Ole Miss senior, and first-team All-SEC center fielder, Kylan Becker was the only Rebel on Saturday that could get to Ellyson. Becker hit 2-2 in the first meeting against the Cajuns while the rest of the team was 1-20.

Sunday’s game one was a little different. Ellyson got pulled in the third after giving up a home run in the third to Mikayla Allee. Louisiana quickly yanked her after the hit, seemingly punting on the first game of the day. Ole Miss would get four more runs in the inning, including another homer by Abby Latham, to go up 5-0. They wouldn’t score again, but they wouldn’t need to, winning 5-1.

Ole Miss needed to win two games against the Ragin Cajuns on Sunday. They just picked up the first behind Molly Jacobson’s complete game and one allowed run.

Starting 44 of the team’s 57 games, and every game for Louisiana in Oxford, the Rebels will likely need to beat Ellyson again this evening. The entire regional now comes down to a single game, with a trip to Arizona and a Super Regional on the line.

Ole Miss will presumptively start Brittany Finney (17-9, 2.68 ERA) in the second game on Sunday. Since it’s softball, everyone is on deck to relief in the winner-take all. This includes Molly Jacobsen, who has now allowed just two runs to the Ragin Cajuns over 14 innings pitched this weekend.