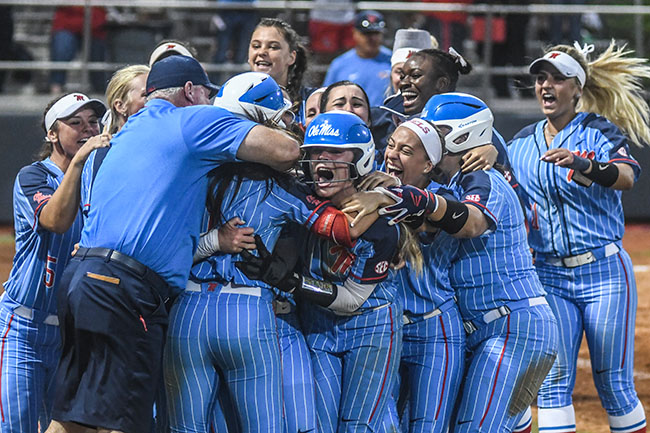 Mississippi players and coaches celebrate a win over Louisiana-Lafayette at the Ole Miss Softball Complex in the NCAA Oxford Regional in Oxford, Miss. on Sunday, May 19, 2019. Mississippi won 5-4 to advance to the NCAA Super Regionals. (Bruce Newman, Oxford Eagle via AP)

Ole Miss softball had to fight back not just to force a game two Sunday, but to win the entire Oxford Regional. Winning both legs of a Sunday doubleheader with Louisiana,  the Rebels won their own Oxford Regional and are heading to just their second ever Super Regional in Tucson, Arizona.

Winning game one couldn’t leave Oxford having not provided their handful of drama. They had to bring more of it in the seventh inning to close the Regional.

If one were to pinpoint the Rebel struggles against Louisiana to a single thing on Saturday’s 2-0 loss, it was simple. Her name was Summer Ellyson.

The Ragin Cajuns starting pitcher has been among the best in the country all year. Making her 44th start Sunday afternoon, Ellyson came into the day 39-4 with a 0.98 ERA. Ole Miss senior, and first-team All-SEC center fielder, Kylan Becker was the only Rebel on Saturday that could get to Ellyson. Becker hit 2-2 in the first meeting against the Cajuns while the rest of the team was 1-20.

Sunday’s game one was a little different. Ellyson got pulled in the third after giving up a home run in the third to Mikayla Allee. Louisiana quickly yanked her after the hit, seemingly punting on the first game of the day. Ole Miss would get four more runs in the inning, including another homer by Abby Latham, to go up 5-0. They wouldn’t score again, but they wouldn’t need to, winning 5-1. 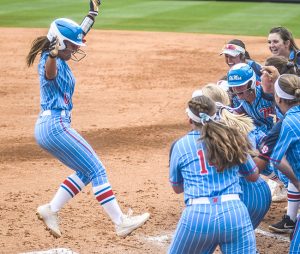 Ole Miss needed to win two games against the Ragin Cajuns on Sunday. They just picked up the first behind Molly Jacobson’s complete game and one allowed run.

Starting 44 of the team’s 57 games, and every game for Louisiana in Oxford, the Rebels will likely need to beat Ellyson again this evening. The entire regional now comes down to a single game, with a trip to Arizona and a Super Regional on the line.

In just one inning of play Sunday evening, Ole Miss hung more runs on Louisiana’s Summer Ellyson than they had in the prior two games against her combined. The Rebels hit Ellyson three times in the opening frame of game two of the doubleheader.

RBI singes from Gabby Alvarez and Jessica Puk put Ole Miss up 2-0 early in the first inning. After going up 3-0 on a Kaylee Horton RBI single in the third inning, it seemed like the Rebels were set to close out the Oxford Regional. When getting the kind of pitching Ole Miss has gotten from Brittany Finney and Molly Jacobsen this weekend, three runs seems like a relatively insurmountable lead. It wasn’t.

Going into the fifth inning, Rebel starter Brittany Finney had allowed just four baserunners. Head coach Mike Smith pulled out Finney after two of the first three batters of the inning reached with singles. Going back to Molly Jacobsen seemed like a no brainer for Ole Miss. The Rebel starter had allowed just two earned runs her first 14 innings pitched against Louisiana.

Raina O’Neal didn’t care about the prior outcomes against Jacobsen. O’Neal took Jacobsen deep to left center. Tying the game in the fifth with a three with a three-run homer, stakes were raised in Oxford.

It just wasn’t Jacobsen’s game. Coming back in the sixth, she allowed one run before turning the ball back over to Finney with the bases loaded. Finney worked the Rebels out of the jam by getting the final batter to line out to third. But the damage was done – Louisiana had taken a 4-3 lead.

Ole Miss didn’t let fans leave the Oxford Regional without a little drama. After homering off of Ellyson in the first game Sunday, freshman Mikayla Allee doubled to right center off Ellyson to lead off the seventh. Hitting 9 for 15 in the Regional, Ole Miss senior Kylan Becker was unbelievable in the entire regional. Getting a second hit in the seventh with no outs, Becker was the winning run. She had already broke the Ole Miss single-season runs record earlier in the game to go along with a robbed homer in the second.

After a hell of a final inning to the Oxford Regional, the #OleMiss Rebels are Super Regional bound!

Winning both games of today’s doubleheader with Louisiana, Ole Miss takes the Oxford region and earns the school’s second ever berth in the supers. pic.twitter.com/UWL1Fm7OWQ

It was Kylee Horton bringing the magic for Ole Miss in the seventh. With the bases loaded, Horton hit a high-bouncing grounder for the walk-off, scoring guess who – Kylan Becker. Getting two runs in the inning to crawl back from the dead, Ole Miss won by a final score of 5-4.

With the dramatic, fight from behind weekend, Ole Miss advances to a showdown with Arizona in the Super Regionals in Tucson. Just their second appearance in the supers ever.