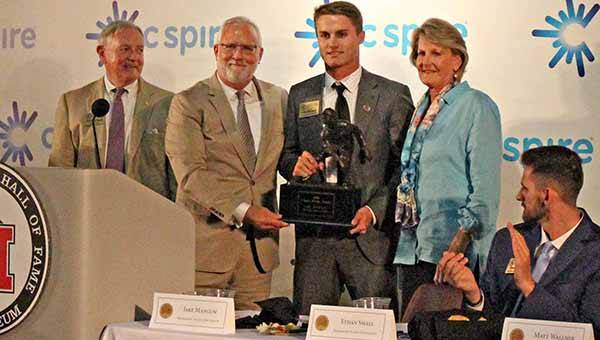 JACKSON — Jake Mangum, one of the best college baseball players this century in the state of Mississippi, insisted there wasn’t any big secret to his success.

“I just play hard and good things will happen,” he said.

Mangum, Mississippi State’s standout center fielder, won the C Spire Ferriss Trophy on Monday as the top college baseball player in Mississippi. He also won it in 2016, making him the first two-time winner in the award’s 15-year history, but that’s just one more historic footnote in a career filled with them.

He set the career hits record for Mississippi State, and then a couple of weeks later for the Southeastern Conference. He now has 370 hits, which puts him at No. 6 on the NCAA’s all-time list.

“If you would have told me four years ago that this would have been my career … it’s been insane. It’s been a dream come true,” Mangum said, before deflecting credit to his teammates. “My four years, I’ve leaned on my teammates. This past weekend I had a really bad weekend but my teammates picked me up and we scored 24 runs. That’s what’s so special about Mississippi State.”

Mississippi State coach Chris Lemonis said Mangum’s biggest contribution is as a team leader. Mangum has played for four coaches in his four years in Starkville, and Lemonis said his presence has been a steadying influence through a lot of turmoil.

The Bulldogs (45-11) reached the College World Series last season and are in line to earn a top-eight national seed in this year’s NCAA Tournament. They’re No. 4 in the NCAA RPI rankings heading into this week’s SEC Tournament.

“I lean on him for a lot of things. Usually I’m asking him what uniform we want to wear. He has such a great pulse of the team. He’s a great leader, him and Ethan (Small). Day to day, they bring a lot of energy to us. They’ve also been here for so long, they’ve experienced so much that they bring a lot to the program,” said Lemonis, who is in his first season as Mississippi State’s coach. “With all the different coaching staffs, all the different coaching styles, the ballplayers have been the constant and Jake’s been in the middle of it the whole time.”

Small, Mississippi State’s ace left-handed pitcher, was one of four other finalists Mangum beat out for the Ferriss Trophy.

Ole Miss gets a bounce heading into SEC Tournament

JACKSON — In terms of the standings, Saturday’s 5-4 win over Tennessee in the season finale didn’t do a whole... read more