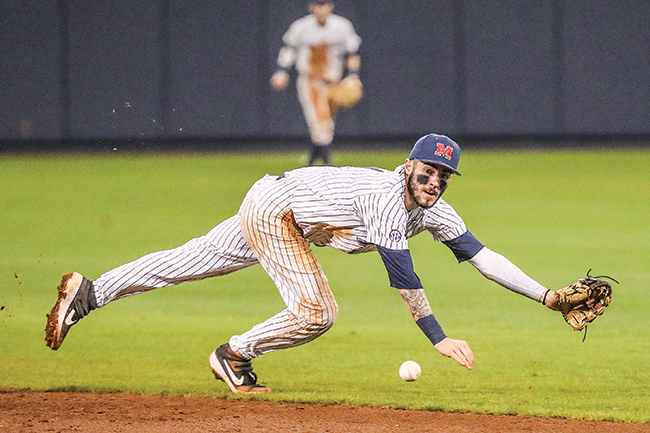 HOOVER, Ala. – The Southeastern Conference announced its annual awards on Monday. Being named to the various teams were three Ole Miss Rebels – Grae Kessinger, Cooper Johnson and Doug Nikhazy.

Kessinger was the unit’s only First Team All-SEC honoree, voted the top shortstop in the conference. Johnson was named to both the Second Team All-SEC and the All-Defense team. Doug Nikhazy was one of three starting pitchers on the Freshman All-SEC Team.

Despite the ups-and-downs of the Ole Miss squad, Kessinger seemed to be the one steady hand. After starting the year slowly, hitting just .225 throughout non-conference play, Kessinger really turned it on down the stretch. At one point he had gotten on base in 40 consecutive games until the streak was snapped on May 14 at Arkansas State. That average of .225? Over the course of the regular season he hit .341 overall and more impressively, Kessinger hit .405 against SEC pitching.

For Johnson, leading the Rebels on defense paired with a big offensive jump in his junior year landed him second team honors. The catcher hit .270 with an on-base-percentage of .368 with 24 RBIs. Johnson’s defense behind the plate is really what led him to second team honors as well as his All-Defense honors. Johnson is only third in the league in runners thrown out, but he gets run on much less than other catchers simply because teams know better.

The freshman year rise was a little surprising for Doug Nikhazy, who’s All-Freshman honors seemed more likely for his Sunday counterpart entering the season. A less-touted recruit than his own freshman teammate, Ole Miss’ Sunday starter Gunnar Hoglund, Nikhazy forced his way into the Rebel weekend rotation with the way he started play this season. Starting the year in the bullpen, Nikhazy would move to the Saturday role during SEC play, going 5-2 in conference with a 3.44 ERA.

For individual honors, Vanderbilt’s JJ Bleday’s record setting season won him SEC Player of the Year. Playing on the SEC’s top team, Bleday hit .346 while driving in 64 RBIs, which tied for the lead league, and led the SEC in home runs with 25. Bleday’s 25 homers broke the Vanderbilt single-season record and was nine more than anyone else in the conference. Winning Coach of the Year was Vanderbilt’s Tim Corbin. Mississippi State’s Ethan Small was the Pitcher of the Year and JT Ginn was the Freshman of the Year.