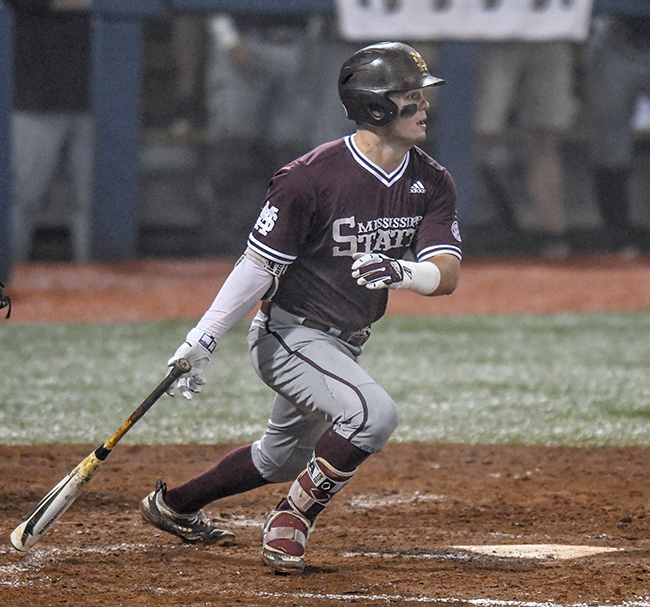 Mississippi State's Tanner Allen drives in a run against Mississippi at Oxford-University Stadium in Oxford, Miss. on Friday, May 10, 2019. (Bruce Newman, Oxford Eagle via AP)

The program is on its fourth coach in four years. Despite that turnover, the high standards set by a guy who hasn’t held the position in more than a decade remain.

“It’s expected now. Thanks to old Ron Polk, if we don’t make it to Omaha it’s a disappointment every year,” senior center fielder Jake Mangum said.

That really would be the case this year.

After a surprise run to the College World Series in 2018, Mississippi State enters the 2019 postseason as one of the favorites to get there. The Bulldogs have a 45-11 record heading into this week’s Southeastern Conference Tournament and won 13 of their last 15 regular-season games.

They’re fourth in the NCAA’s RPI rankings, almost guaranteed to host at least a regional in the NCAA Tournament and likely to land a top-eight national seed barring a quick flameout in Hoover. The biggest pressure for the Bulldogs, it seems, is to maintain the excellence they’ve displayed all season long.

“We’re not walking into Hoover with a ton of pressure. We don’t have to win X amount of games to do this, or host a regional. We feel like we’re in a good spot,” Mississippi State coach Chris Lemonis said. “But our kids are so competitive that they just want to win. That’s what makes us great. It’ll be a fun trip for us. It’s a good feeling in our clubhouse right now.”

Mississippi State will play the late game Wednesday night against the winner of Tuesday’s late game between South Carolina (28-27) and LSU (34-22). Mississippi State is the No. 4 overall seed and earned a bye into the double-elimination portion of the 12-team tournament.

No matter what happens this week, Lemonis said he thinks the Bulldogs have done enough to earn a top-eight seed that would allow them to host both a regional and super regional in the NCAA Tournament.

“I’d like to think so, but we’ll just keep on playing and trying to add more to our resumé. We feel like we’ve put together a pretty good resumé to this point,” Lemonis said. “Even as a national seed, you can be a No. 2 national seed or an 8 national seed and you’re probably not having to have as tough a road. For us, we haven’t talked a lot about any of that stuff as a ballclub. They just know the more they win the better it is, and that’s kind of the mindset of our program.”

Lemonis set a school record for wins by a first-year head coach, and admits he walked into an enviable — if awkward — situation when he was hired away from Indiana despite the turnover.

John Cohen stepped down to become the school’s athletic director after the 2016 season. Andy Cannizaro led the team in 2017, then resigned three games into the 2018 season. That led to a memorable year under Gary Henderson, who guided the Bulldogs to the College World Series as the interim coach.

Through all of that, the Bulldogs maintained a high level of success. They won the SEC regular-season title and reached the super regionals in Cohen’s final season, played in another super regional in Cannizaro’s only full year at the helm, and got to Omaha with Henderson. They’ve won 44, 40 and 39 games the past three seasons.

Lemonis, who was hired last June, credited the players and the culture around the team for allowing it to thrive during a chaotic time that would have buried a lot of programs.

“It was such a different dynamic walking in. We joke about it now because I don’t know if a coach has ever come in and taken over a team coming back from Omaha,” Lemonis said. “I’ve been so fortunate. These guys that are here today, plus a lot of the other older kids, it’s a very player-driven locker room. They know what it takes and they’ve done a great job of helping (coaches) out in the process.”

Not surprisingly, Lemonis added that this year’s Bulldogs are built on consistency. They only had two brief losing streaks all year — two in a row at LSU in March and a three-game sweep at Arkansas in mid-April — and appear to be peaking at the right time. Now they’ll try to carry it through the SEC Tournament and win it for the eighth time, and first time since 2012.

“We’ve been pretty hot most of the year. We had a tough weekend at Arkansas. That was our little blip. But the strength of our team has been that we’ve been pretty consistent,” Lemonis said. “Hopefully we can go into the tournament, play our style of baseball, get quality starts, play good defense, get timely hits. It’s the old coaching clichés, but those things are really what we’ve done pretty much all year.”