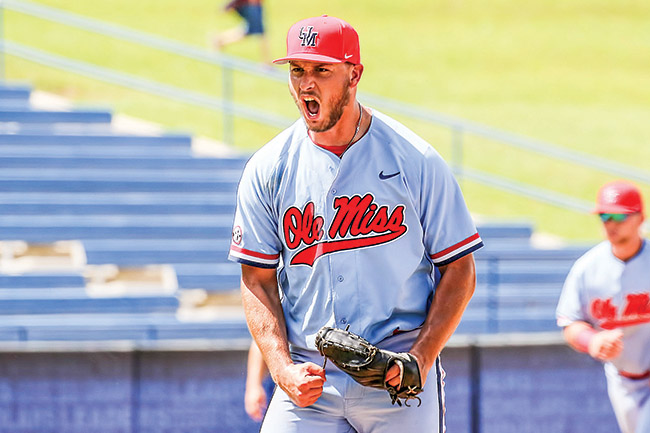 Ole Miss' Will Ethridge reacts during the game against Missouri in the SEC Tournament in Hoover, Ala. on Tuesday, May 21, 2019. (Michael Wade)

HOOVER, Ala. – Ole Miss’ SEC Tournament title defense got off on a winning note Tuesday in Alabama as they defeated Missouri 2-1 in the single-elimination opening round of the tournament.

A pitching duel from the start, Ole Miss won a narrow ballgame Tuesday afternoon. Despite combining for 17 hits, both teams would score runs in just one inning. However, the way the teams went around the impressive pitching was very different.

“It was just a tremendous college baseball game. We said so much this year, to our team, it takes all kinds (of wins). Certainly, today was one of those pitching and defense kind of games,” said head coach Mike Bianco. “And there’s not a better guy on the mound for us than Will Ethridge to pitch in that type of game.”

An interesting side-plot, today’s tournament game was set up as a stylistic battle within a battle from the start. Both teams entered the game knowing they needed to win to stay alive. Yet the winner would be setting themselves up for, at minimum, games the next two days.

Ash did what you would want from a reliever, and arguably more. In four innings of work, Ash made it through the Rebel lineup nearly twice before being replaced to start the fifth. He allowed just three hits and no runs.

Ethridge was everything Ole Miss fans have come to expect from their reliable Friday night starter. The junior allowed Mizzou to hit the ball hard, as is the Ethridge way but limited the Tigers to a lot of fly balls and pitched well with runners on base and in scoring position. Going seven full innings, Ethridge allowed just one run off a pair of doubles in the second inning.

“There’s a lot of people that get a lot of credit on our team. But probably the guy that’s as least talked about and deserves as much credit as anybody for our season is Will,” Bianco said “He’s just been tremendous of Friday’s… today was just another chapter this year of how well he’s really pitched.”

Coincidentally, Ash leaving the game was when Ole Miss began to start seeing the baseball better. Leading off the fifth inning in the nine hole, Jacob Adams took new pitcher Jacob Cantleberry to left-center for a leadoff double, bring up the top of the Ole Miss lineup. Thomas Dillard, having recently moved to the leadoff role, subsequently doubled himself, tying the game.

Ole Miss would get two runs in the inning. Cole Zabowski drove in Thomas Dillard before the inning ended with Ryan Olenek grounding into a double play. After five, it was 2-1 Rebels. Despite hitting Missouri ten times on the day, the fifth was the only inning Ole Miss was able to string enough together into runs.

Coming in to replace Ethridge was Tyler Myers in the eighth and Ryan Olenek in the ninth. Myers pitched a clean inning, but things got a little dicey in the ninth. Olenek hit the opening batter, got two outs and then walked the winning run to first base. Olenek then struck out the final batter for the Ole Miss win.

“I just throw strikes. I just have the mentality to throw strikes,” Olenek said, very casually and relaxed. “You just prepare like you would for anything. It feels good to be out there and I love being out there and having the opportunity to do it. I just try to take advantage of it.”

The Rebels didn’t end the season well, losers of six in a row before beating Tennessee by one run to close out their regular season action. But it’s a brand new day in Alabama, and the Rebels are on to the double-elimation portion of the tournament.

The defending champions of the SEC Tournament, Ole Miss will have to come out from playing the Tuesday game for their 2019 run. They had a first-round bye in 2018. Ole Miss advances to a second round matchup with No. 2 seed Arkansas. The Rebels took two of three games earlier in the season from the SEC West Champion Razorbacks. Wednesday’s game will begin approximately at 1 p.m. and is on SEC Network.