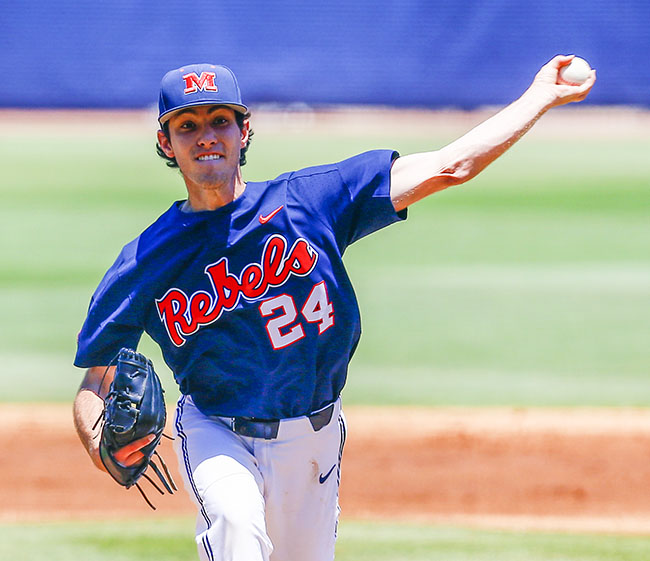 Ole MIss’ Zach Phillips (24) throws a pitch during the first inning of the Southeastern Conference tournament game against Arkansas on Wednesday, May 22, 2019, in Hoover, Ala. (Butch Dill, AP)

HOOVER, Ala – It wasn’t for lack of opportunity, but Ole Miss is no longer in the winners bracket of the SEC Tournament. The Rebels lost to Arkansas 5-3 Wednesday afternoon. In doing so, they are now one loss away from elimination.

Ole Miss lost a game Wednesday in which they left nine runners stranded on base, five of whom were in scoring position. For a team as aggressive as the Rebels have been on the base paths recently, the situational hitting didn’t do its part in Wednesday’s action. With runners in scoring position, Ole Miss hit just 1 for 12.

“We just had a few opportunities offensively that we didn’t capitalize on, especially early,” said Ole Miss head coach Mike Bianco. “We just didn’t have enough good at-bats to score. Not trying to take credit away from Arkansas, that’s why they’re so good. To beat them, you have to play better than that.”

Arkansas scored in the first inning on a dribbler that squeezed the gap between third and shortstop perfectly. Their run in the third inning to go up 2-0 came on a fielder’s choice ball to the Tim Elko at first base that came up just short of completing a 3-6-1 double play.

He may not have put up a lot of zeros early, but Zack Phillips was actually pretty good for Ole Miss in this one. The lefty only gave up four hits, and a lot of the damage came on balls that weren’t very well hit. A kid from Texarkana, this game meant a little more to him.

“I felt good about it. Growing up in Arkansas, my whole family was big Arkansas fans,” Phillips said. “It was pretty neat getting to pitch against them. It felt good but it just wasn’t our day.”

Just like their first game in Hoover, the Rebels didn’t get on the board until the fifth inning on Wednesday. The bottom of the order did their job in the fifth, with Anthony Servideo and Justin Bench reaching base with one out to start the rally. Playing just his fourth game as the leadoff hitter, Dillard continued his hot streak, driving in Servideo before Grae Kessinger brought in Bench to tie the game at two. Ole Miss would go up 3-2 the next inning behind an RBI from pinch hitter Kevin Graham.

Despite a small sample size, Dillard is thriving in this new leadoff role. Through four games, Dillard is hitting 9 for 16 with two walks and two RBIs from the leadoff spot. However, as a team, they’ve struggled offensively through two games in the SEC Tournament. Ole Miss has now scored just five runs in two games in the tournament, batting just .234 as a team and leaving 17 men stranded on base in two games.

“I just think we can be a little bit tougher and believe in ourselves more,” Dillard said about the team’s offensive woes in Hoover. “We have great guys one through nine in our lineup and even after that. We just have to want to be the guy to go out there and want to get that hit.”

Arkansas didn’t take long to get that run back, chasing Phillips out of the game with the go-ahead runs in the sixth inning. Pitching really well through five, Phillips gave up a handful of hard-hit balls in the frame, including a ball just foul that traveled a good 400-feet. The Razorbacks ran Phillips off the mound after scoring two, going up 4-3. In came Austin Miller.

Miller had simply not pitched well lately. Ole Miss’ most reliable middle reliever for much of the season, he had given up five earned runs over his past 3.2 innings of work. Today he looked good to start, striking out the first batter he faced. Yet he still allowed one run in just 1.1 innings on the mound.  Part of an Ole Miss bullpen that has lacked answers and consistency, baby steps in the right direction for Miller would be welcomed. Houston Roth finished the game for the Rebels in relief of Miller, throwing a scoreless final inning.

With the loss, Ole Miss falls to the losers bracket of the SEC Tournament. If they drop one more game, they’ll be headed back to Oxford. The Rebels play again Thursday at 9:30 a.m. against Texas A&M. A team Ole Miss has seen a fair amount of success against, the Rebels swept Texas A&M at home to end April.