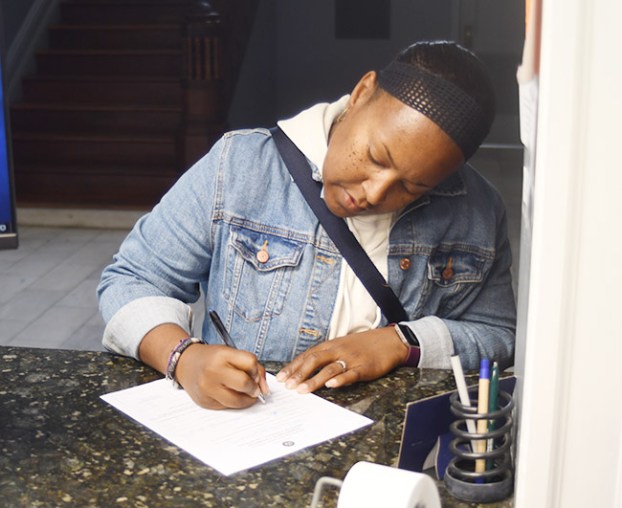 Kesha Howell-Atkinson fills out paperwork to begin the process of qualifying to run for the Alderman Ward 4 seat which was previously held by her father Ulysses Howell, in Oxford, Miss. on Wednesday, May 22, 2019. Those wishing to run must be qualified by June 12 and the special election will be held on July 2. (Bruce Newman, Oxford Eagle)

If Mayor Robyn Tannehill had it her way it would be a very long time before someone new sits to her right at Board of Alderman meetings. Unfortunately, Mississippi laws do not allow that to happen.

During Tuesday’s regular meeting the Oxford Board of Alderman approved a resolution announcing a special election for the Ward IV seat. Longtime alderman Ulysses ‘Coach’ Howell served Ward IV 26 years until his untimely passing earlier this month. Howell suffered a stroke on May 10 and passed away on May 11.

State law requires the Board announce the vacant seat and a date for a special election to fill the seat within 10 days of the Howell’s death. Tuesday marked the 10th day.

The resolution announced the special election would take place on July 2. Candidates must be qualified 20 days from when the election will take place, which will be June 12.

Wednesday was the first days people could begin the qualification process. The first person at the City Hall on Wednesday morning was Kesha Howell-Atkinson, the daughter of Howell.

Throwing her name in the hat to take over the chair her father occupied for so long seemed like the obvious decision to her.

“I am running to continue to doing the things that my father believed in,” Howell-Atkinson told the EAGLE. “He was constantly giving back to the community that gave a lot to him. Mayor Tannehill said it perfect, ‘He was the example of a perfect public servant.'”

Howell-Atkinson is a physical education teacher at Oxford Middle School and the head coach for the girls’ track & field team at OMS.

For the first time since being arrested on Monday, Matt Kinne made his first appearance in circuit court on Wednesday.... read more