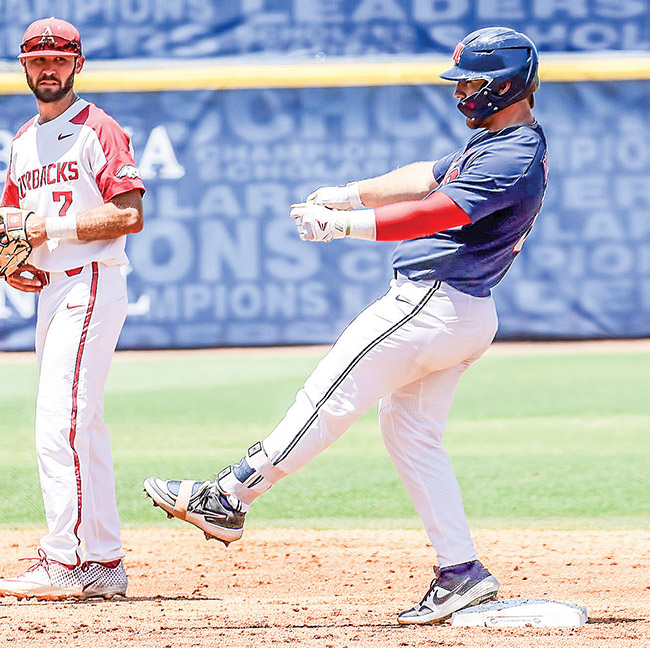 Ole MIss’ Thomas Dillard hits a double against Arkansas in the 2019 SEC Baseball Tournament in Hoover, Ala. on May 22, 2019. (Michael Wade, Wade Event Photography)

HOOVER, Ala – Just about the only Rebel that swung the bat well in the Ole Miss loss to Arkansas on Wednesday, Thomas Dillard wasn’t exactly happy in the postgame press conference. But he did have a few jokes.

The junior left-fielder’s jokes are no longer just comedic jabs. Significant changes to a lineup during the final series of the regular season are not exactly commonplace. Apparently, Mike Bianco didn’t care about commonplace. Dillard, who had been hitting cleanup all season, was moved to the leadoff spot during the second Rebel game in Tennessee this past weekend.

Before the change, Dillard had fallen off from his early-season superhuman performances. After hitting .363 to start the year, Dillard was hitting just .171 over a 22-game stretch before the change. So far, the early returns are quite promising. After the first four games at leadoff, Dillard is hitting 9 for 17 (.529).

“Thomas got a little stagnant in the middle. He’s batted four for us, basically since he stepped on campus. He’s certainly one of the best hitters on the team. But he wasn’t productive where he was for the past few weeks,” Bianco said. “(Hitting him leadoff) is very scary if you’re the opposing team. Right off the bat you have a 240-pound guy that’s a switch hitter that can hit it out of any park.”

As Bianco touched on, Dillard doesn’t look like your standard leadoff man. The kid is listed at 6-foot and 230-pounds and I think his forearms are as big as my thighs. Yet he plays baseball a lot like you would expect a leadoff man too – just with a little more power.

At the time of writing, Dillard is hitting .306 with a team-high on-base percentage of .444. Dillard’s drawn 51 walks on the year, ten more than any other Rebel and 15 more than Anthony Servideo, the former Ole Miss leadoff man. He’s also a capable runner. He’s not the fastest guy on the team, but he is third in steals with 14. He’s only been caught stealing twice and leads the team in triples – pretty impressive for a guy of his size.

“It’s just kind of taken a little pressure off of me,” Dillard said. “Not having to hit fourth and worry about driving in everybody and trying to put pressure on myself to drive the ball out of the yard. I just have to get on base for the other guys.”

Ole Miss certainly isn’t going to complain if Dillard drills a leadoff homer with no one on base. But they also won’t be questioning the decision. The sample size is small, but Thomas Dillard is excelling in his new role.