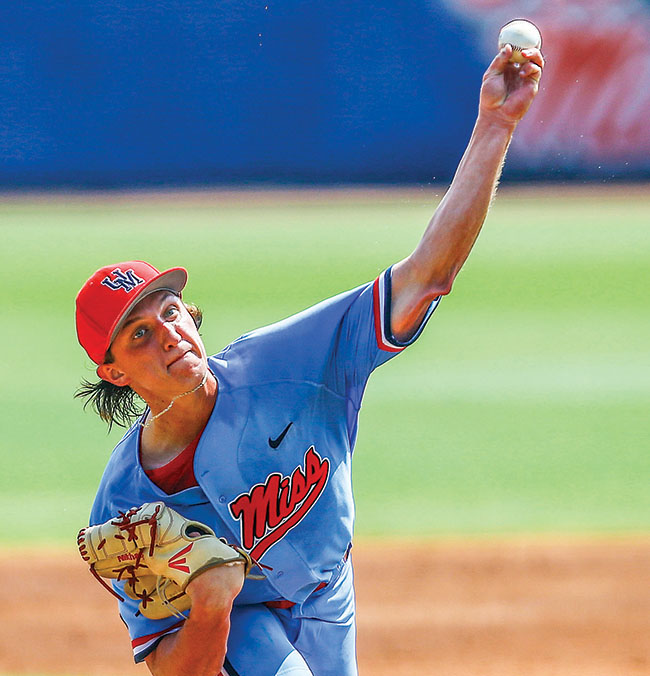 Ole MIss pitcher Doug Nikhazy throws a pitch during the fourth inning of the Southeastern Conference tournament game against Texas A&M on Thursday, May 23, 2019, in Hoover, Ala. (Butch Dill, AP)

HOOVER, Ala. – Ole Miss couldn’t have asked for more from freshman Doug Nikhazy on the mound on Thursday. Throwing for eight full innings, Nikhazy kept the Rebels alive for most of the morning before the offense finally came through in the ninth. Despite being no-hit through eight innings, Ole Miss pulled through late, stringing together two 9th inning hits in the 1-0 victory over Texas A&M.

“It was just a gutsy, tremendous performance by Doug,” said Ole Miss head coach Mike Bianco. “We talk so much about this league and competition. In game three you face a team that’s ranked in the top-20 and throws a first-rounder and the guy threw a no-hitter through eight. It’s just a game where you have to get a couple of hits and we got two hits in one inning.”

As has been the storyline all week at the SEC Tournament, the Ole Miss starting pitchers were fantastic while the offense struggled to provide adequate support. Ole Miss got seven innings with just one run from Will Ethridge in Tuesday’s win. Losing Wednesday to Arkansas, Zack Phillips was better than the four earned runs over 5.2 innings suggested. Thursday was Nikhazy’s day to shine and the freshman did so with flying colors.

Nikhazy allowed just three Aggie hits and and walked four. Blanking the Texas A&M team through those eight, the freshman’s ERA drops to 3.17 on the year. The problem wasn’t on the mound for Ole Miss. It was the inability to come through at the plate until the end of the game. Silent bats aside, the top of the Rebel lineup came through when they were needed most.

“It wasn’t necessarily difficult today,” Nikhazy said. “But I don’t think I necessarily found it on the mound today, like having complete control of all my pitches. But I was able to work through it my defense did a great job behind me.”

Thomas Dillard, excelling in his new role as the Rebel leadoff hitter, broke up the no-no bid to lead off the ninth inning. After Grae Kessinger popped up a bunt on the next at-bat and Tyler Keenan grounded out, it seemed for nothing. Yet it was Cole Zabowski coming through with one of the biggest hits of his Rebel career. Zabowski drove a 1-0 pitch down the right field line, scoring Dillard, who had moved to second on a balk.

After getting no-hit through eight innings, the Rebels had a 1-0 lead going into the bottom of the ninth. Parker Caracci, in to relieve Nikhazy, couldn’t let Rebel fans go back to their hotels without providing a little bit of drama. Caracci gave up a one-out double to the Aggies before getting the final two batters to fly out and strike out. Final score: 1-0 Rebels.

“It was a vibe like ‘I think we’re going to get this done,'” Zabowski said after, talking about the mood in the dugout during the no-hit bid. “We’re all fighting every at bat. Of course you want to score five, you want to score ten off this guy. But the most you can do is fight and put runners on and try to make something happen.”

Despite pulling through late when it mattered most, simply connecting barrel with bat has been a struggle for the Ole Miss team the entire week at the SEC Tournament. As a team, Ole Miss is hitting just 17 of 89 (.191) through three games in Hoover. They’ve scored just six times in three games. Just on Thursday against Brad Doxakis, the team went hitless his entire eight innings on the mound. Doxakis has been a Rebel killer all year, though. Ole Miss hit him just five times for three runs over seven innings when the teams met earlier this season.

Ironically, the Aggies are having similar struggles to Ole Miss right now. Wednesday, Chris Webber took a no-hitter into the eighth in a 2-0 loss to Georgia. Today, the no hitter lasted into the ninth in another loss.

With the win, Ole Miss survives to play another day of defense of their SEC Tournament crown. The Rebels will play Arkansas, who lost 3-1 to Georgia, on Friday at 3 p.m.