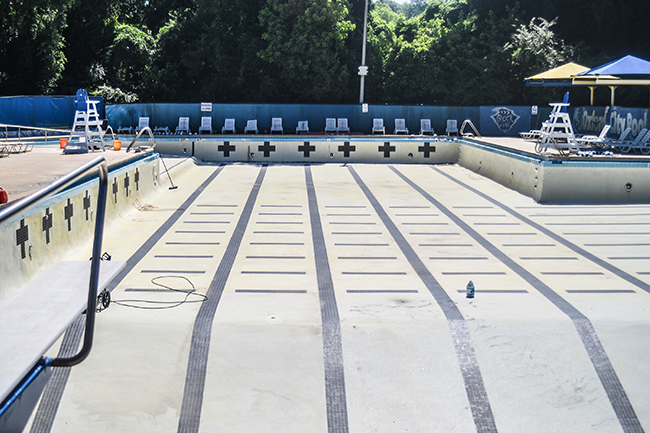 The opening of the Oxford Swimming Pool, in Oxford, Miss. on Thursday, May 23, 2019, has been delayed. (Bruce Newman, Oxford Eagle via AP)

The warm days of summer have arrived in Oxford, but residents will not be able to cool off in the city pool this weekend. The city pool was scheduled to open for the summer on Saturday, but the Oxford Park Commission announced that is no longer the case.

Seth Gaines, OPC director, confirmed the decision to keep the pool closed and cited the need for more repairs.

“Due to more extensive damages and more repairs needed than originally planned or expected, the city pool will not be open this weekend,” a statement provided by the OPC read. “Although we can’t give an exact date, crews are working diligently to make those needed repairs and get the city pool open as soon as possible.”

The news comes after Gaines made a request to Oxford’s Board of Aldermen in January to repair the pool nearly four years after the last major repairs were made. In March of 2015, the pool had repairs to update safety features, new plaster and tile that cost nearly $250,000. From 2015 to 2018, the tile began to crack in certain areas along the coping line. A visible crack formed around the perimeter of the pool, causing a water leak.

Once the pool opens, it will remain open through Labor Day.