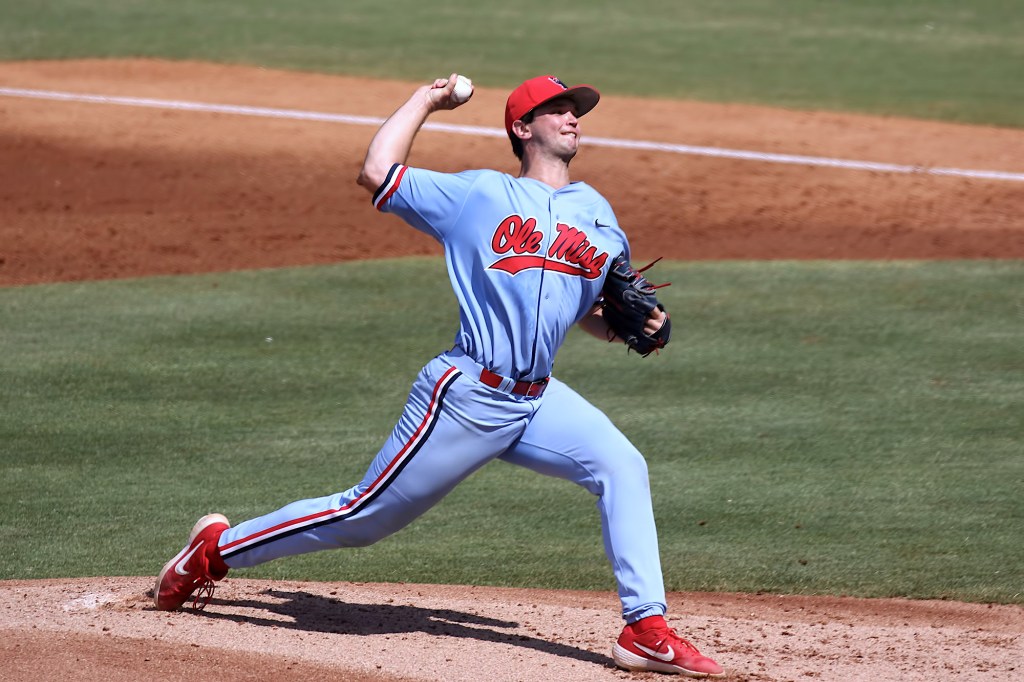 Gunnar Hoglund pitched his longest outing of the year for Ole Miss in their SEC Tournament game against Arkansas. Friday, May 24, 2019 (Michael Wade)

HOOVER, Ala – Ole Miss needed more late game heroics in Hoover on Friday, but their SEC Tournament title defense remains alive into the weekend. Trailing 2-0 after four and 2-1 going into the eighth, Ole Miss pulled off their second straight late-inning comeback, beating Arkansas 3-2.

“It was just another really well-pitched game for us. Another day where we struggled offensively,” said head coach Mike Bianco. “The kids kept their composure and continued to play defense and pitch so we could win this type of game.”

Gunnar Hoglund was better than he’s been all year through three innings. Even the hiccups in the fifth, it’s Gunnar’s longest and best statistical outing of the freshman’s Rebel career.

After retiring the first nine batters faced, using just 35 pitches over the first three innings, Hoglund lost things if just for a bit. Four of the first five Arkansas batters in the fourth inning reached base. Matt Goodheart, the second of the four, took Hoglund deep to center field for a 400-plus-foot home run.

Just Goodheart’s third homer of the year, Hoglund would get out of the inning down just 2-0. After loading the bases in the fifth, he also got out of that one unscathed. The Rebel’s typical Sunday starter has struggled tremendously this season getting through the opposing lineups a second time – this is the reason he’s failed to make the fifth inning in 9 of his 13 starts. Today was much different, settling back in after allowing two in the fourth.

“It was a great effort by Gunnar today. A true freshman that keeps getting better and better each outing,” Bianco said. “He was awesome the last few weeks, not just the Tennessee game but he pitched well at LSU. He just continues to get better.”

Ole Miss got one of those runs back in the fifth, courtesy of another Rebel freshman. Kevin Graham took Razorback starter Connor Noland, another freshman, to deep right center field for the first Ole Miss run in the game. It’s been a really good freshman season for Graham.

He certainly doesn’t have the best batting average or on-base percentage on the team, but he’s proved to be one of the best power hitters. The home run is Graham’s ninth of the year, fourth off the team and only four off the team lead. The freshman has some pop.

Going into the eighth trailing 2-1, Ole Miss needed just one hit to take their first lead of the game. Thomas Dillard’s single to right scored Cooper Johnson, on from a leadoff walk, moving Jacob Adams to third, on after getting hit. First team All-SEC selection Grae Kessinger then did what First team All-SEC selections do, hitting a ball far enough to center field for a sacrifice fly to give the Rebels a 3-2 lead.

For the second game in two days, it was Parker Caracci finishing things off with another shutout ninth inning for a win.

The win extends the Ole Miss defense of their 2018 SEC Tournament championship. A critical win against a team that came into the day No. 6 in RPI – they are now 3-2 against Arkansas – Ole Miss will play Georgia at noon on Saturday in the SEC Tournament semifinals.