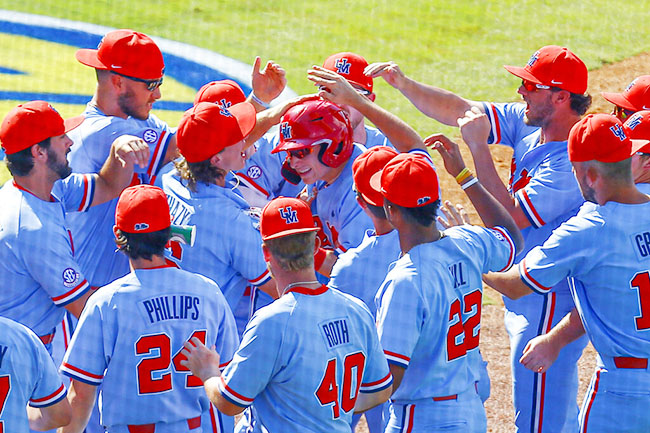 Mississippi's Kevin Graham (35) celebrates with teammates after hitting a home run against Arkansas during the fifth inning of an NCAA college baseball game at the Southeastern Conference tournament, Friday, May 24, 2019, in Hoover, Ala. (AP Photo/Butch Dill)

HOOVER, Ala – Ole Miss has needed back-to-back, late-inning comebacks to stay alive in the SEC Tournament. The Rebels have pitched incredibly well through four games in Hoover, but the offense simply hasn’t been there. Yet, when Ole Miss needs it most, they’ve shown the ability to pull out hits in critical moments to keep their tournament run alive.

The scoreboard and box scores do have quite a few negatives. Ole Miss is just downright miserable looking at hitting stats in the four games since they’ve arrived in Hoover. After hitting 3 for 23 in Friday’s 3-2 win over Arkansas, the team is now hitting 20 for 112 in the SEC Tournament (.178).

Against Texas A&M on Thursday, the Rebels were getting no-hit into the eighth. They scored twice in the ninth inning to pull off the 2-1 comeback win. Friday, they trailed 2-1 entering the eigth before scoring twice to win the game in regulation.

Thomas Dillard on the #RebsBSB pension for come-from-behind wins in Hoover pic.twitter.com/X4rE0O3xEV

“I think it’s the fact that we have a veteran offense,” said junior Thomas Dillard. “We know that you have to play nine innings. We know that you have to get 27 outs. The guys with the bat, we want that challenge. We want the best bullpen arms and we want the best starters. Even if we have a bad seven innings, we still have two innings left to put an inning together.”

As of Thursday May 23, the last time the data was compiled, Ole Miss ranked fifth in the conference in season-long batting average (.278) and fourth in on-base percentage (.385). In Hoover, they’ve scored just nine runs in four games and are averaging just five hits a game. It’s simply bad numbers, yet they’re winning.

“Our takeaway the last few few games is that as bad as the production and results have been, the guys have hung in there,” Bianco said. “There have been times that we haven’t hung in there… but we’ve been able to hang in there (this week), not just to get a timely hit but to keep the game intact on the mound and defensively.”

As Bianco touched on, the Rebel pitching has done a masterful job keeping Ole Miss to the point where they can come back. Where the offense has scored just nine runs over four games, the pitching has allowed just eight. Ole Miss is 3-0 in the tournament in one run games.

The Rebel offense has been objectively bad. Yet with their backs up against the wall, they’ve done their part to keep the team dancing.