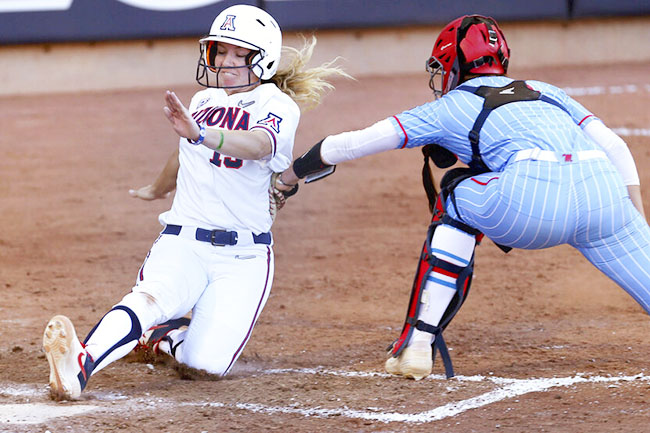 Arizona's Jessie Harper (19) gets tagged out just short of the plate by Mississippi catcher Autumn Gillespie (24) but a run crossed ahead of her on Malia Martinez's single during the fourth inning of Game 1 of the NCAA softball tournament super regional Friday, May 24, 2019, Tucson, Ariz. (Kelly Presnell/Arizona Daily Star via AP)

Ole Miss got ahead of the favored Arizona Wildcats early, but were unable to hold on in the opening game of the Super Regional, losing 5-2.

Ole Miss sent seven batters to the plate in the first inning, four of whom reached base in the top half of the opening game of the supers. Coming through a she has done all career for Ole Miss, it was Kylan Becker who scored the game’s first run after reaching base on a leadoff single.

After giving up a run of their own in the bottom half of the frame, Ole Miss retook the lead in the second inning when Abbey Latham’s double scored, guess who? Kylan Becker. Becker went 2 for 4 on the day scoring the only two Ole Miss runs. Going up 2-1 at the time, they would not score again.

An Arizona team that thrives on hitting home runs, Ole Miss did a good job on the mound limiting the Wildcats to single-base hits. However, they allowed much too many of those. Arizona totaled 12 hits, 10 of which were singles, in the game against Ole Miss’ Brittany Finney. Arizona scored four unanswered runs from the second to the fifth to ice the 5-2 victory.

For Ole Miss, this is just their second ever Super Regional appearance. They’ve never advanced to the Women’s College World Series. Now, with their backs up against the wall, they’ll have to win consecutive games over the next two days to do just that. Game two of the series is set for 7 p.m. Saturday and is televised on ESPN2.