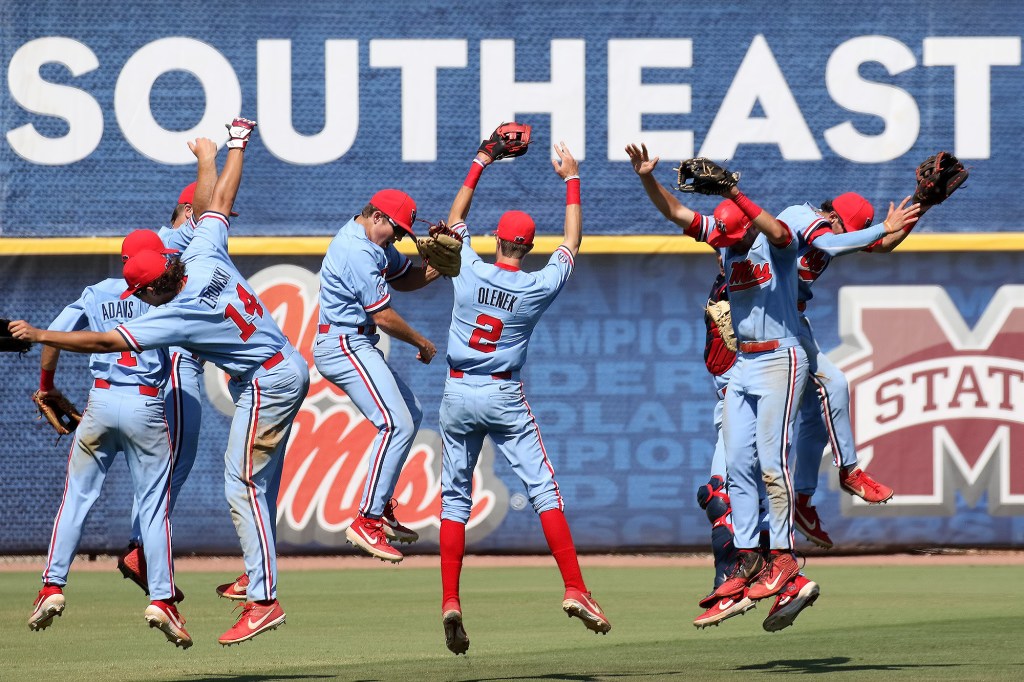 Rebels celebrate their victory over Georgia at the Southeastern Conference tournament on Saturday, May 25, 2019, in Hoover, Ala. (Michael Wade)

HOOVER, Ala. – Ole Miss seemed down and out heading to Hoover. Despite closing the regular season with a win, the six game losing streak had dropped Ole Miss’ RPI into the mid-30s. Now, after an unexpected 4-1 run to the SEC Tournament finals, the Rebels have put themselves back in the competition to host a regional.

“It’s unfortunate that we’re in that situation, but we kind of did that to ourselves,” said Ole Miss head coach Mike Bianco. “We’ve made a lot of amends this week towards that.”

About those amends. With their 5-3 win over Georgia on Saturday, the team has added two top-10 RPI wins (and three top-20 RPI wins) during their Hoover run. Sunday in the championship game, they’ll get a chance to add a win over (No. 2 RPI) Vanderbilt.

#RebsBSB’s odds of hosting a regional looking better by the day. Here’s what their resume looks like right now. Not bad. pic.twitter.com/RzjcY1bwBe

At the time of writing – Saturday night after the conclusion of Vanderbilt-LSU – RPI has not yet reset. Going into Saturday, Ole Miss sat at No. 24, just a one-spot bump after beating No. 7 Arkansas on Friday. Getting a win over (No. 3 RPI) Georgia should push them into the 20-22 range.

“I certainly think they’re one of the top-16 teams in the country,” said Georgia coach Scott Stricklin after Saturday’s game. “I don’t know if they’ll get to host but I can tell you that no one wants to see them as a two seed. That lineup is as good as anyone in the country.”

The precedent for Ole Miss hosting is what’s hard. Being in the 20s and RPI and then hosting is really, really hard. It’s happened only twice for SEC schools – Tennessee in 2005 and Kentucky in 2006. What’s more precedent setting is the number of SEC schools regularly awarded regional bids.

As seen from the tweet below, four is the regular number of SEC schools that host. There’s a precedent of more, but that seven schools that hosted in 2016 is much more of an outlier than a norm.

Number of SEC regional hosts per year since 2000.

There’s currently 4 locks (Vandy/MSU/UGA/Ark). LSU is a probably. #RebsBSB and TAMU on the bubble.

To get #OleMiss a regional, they need to award 6+ SEC regionals – only happened twice recently

(yes. written on a napkin) pic.twitter.com/hEsGBKaysd

Based on resume and these numbers, there are four SEC schools that are locks to host and all are likely national seeds. Vanderbilt (No. 2 in RPI), Georgia (No. 3), Mississippi State (No.4) and Arkansas (No. 7) will all host. LSU (No. 16), with their run to the tournament semifinals, will likely host. That’s five schools. To give Ole Miss a regional, the committee would have to go to six, something they’ve done just twice this century.

“I think the win today probably complicated it. I don’t know what the RPI will be but when you start to look at the other metrics, I think we lead the country in quadrant one games,” Bianco said after Saturday’s win. “When you beat a national seed in Georgia, a national seed in Arkansas and win four out of six against an Arkansas team that we haven’t played at home and everyone is convinced will be a national seed. There’s a lot to like about our team.”

The case for Ole Miss to host is simple – it goes beyond their RPI and numbers to just look at the number of really, really good team’s they’ve played this year. Even before playing Vanderbilt on Sunday, Ole Miss will have played more games against the RPI top-50 than any other team in the nation. Seriously. No one has played more top-50 games than the Rebels.

It’s far from set in stone, and it would require the NCAA Tournament selection committee to go back to a precedent they’ve just done a handful of times. But Ole Miss hosting an Oxford regional is in play. A win over Vanderbilt tomorrow would go a long way, but the Rebels are in good shape moving forward.