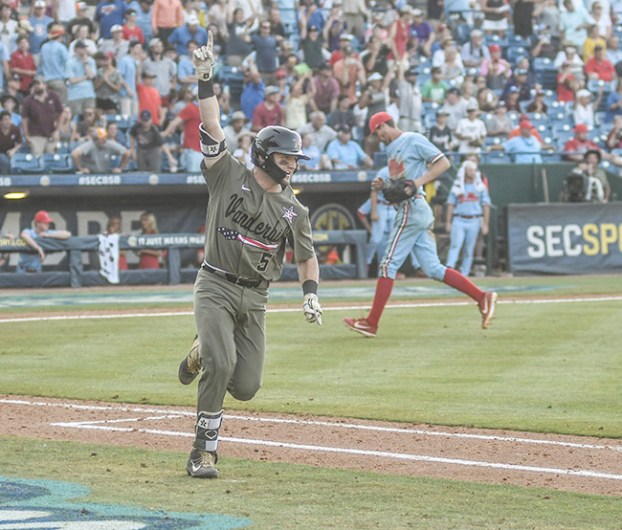 Vanderbilt's Philip Clarke celebrates his game winning hit against Mississippi in the championship game of the SEC Tournament at the Hoover Met in Hoover, Ala. on Sunday, May 26, 2019. Vanderbilt won 11-10. (Bruce Newman, Oxford Eagle via AP)

HOOVER, Ala. – An eight-run lead just wasn’t enough to put away Vanderbilt.

After a string of long, dramatic and low-scoring games, Ole Miss decided on Sunday in the SEC Tournament Championship game against Vanderbilt would be a fireworks show. The problem was, they couldn’t keep up. Despite hanging six runs in on the Commodores for the first inning, Ole Miss lost the championship game 11-10 to Vanderbilt. The title defense came close to fruition.

Patrick Raby had been fantastic for Vanderbilt all year. The senior entered Sunday with an 9-1 record and 2.67 ERA. Having a first round bye and not having played Friday, Vanderbilt still had fresh arms – Raby was one. They seemed fresh and prime to have the edge in the winner-take-all championship game. Ole Miss didn’t seem to care.

Ole Miss sent 10 batters to the plate in the top-half of the first time. With just three hits, they hung six runs off of Raby, running him off the mound after recording just two outs. Raby’s control was off, walking four batters, and Ole Miss took advantage of their early opportunities.  After scoring nine runs in their first four games in Hoover, they scored six in the top of the first against Vanderbilt.

“He was just kind of spraying it a little bit which is uncharacteristic of a great pitcher like him,” said Thomas Dillard. “Jumping on a pitcher like that early shows what we can do. I think our offense one through nine is really dangerous.”

Vanderbilt, arguably the nation’s best team, wouldn’t go down without a fight. They’d match Ole Miss’ three runs in the second and third with three of their own. The Commodores then loaded the bases with no outs in the fourth for SEC Player of the Year JJ Bleday. Thankfully for Ole Miss, the conference leader in home runs (26) would just fly into a sacrifice RBI. However, four batters later Pat DeMarco took Tyler Myers deep to left field. The three run shot cut the Ole Miss lead to 9-8.

On the mound, it was a day characterized, in part, by short rest for the Rebels. Zack Phillips started the day on just three days rest, going two innings and starting the third before getting pulled. Phillips was credited with the first three Vandy runs, but really did all he could for the Rebels on short rest. Will Ethridge came into the game with one out in the fifth. Ethridge was working on four days rest.

Leading 10-9 in the sixth, Jacob Adams made a two out error at second that could have closed the frame. Vanderbilt would tie the game with the next batter, a two-out double. Bringing the score to 10-10 after six, the Commodores had scored in five straight innings to tie things up.

As good as the offense was early, the Ole Miss bullpen came through in a big way in the late innings. Austin Miller gave the Rebels two massive innings in the seventh and eighth. He allowed just one hit and one walk. The two scoreless innings ended the Vanderbilt run of scoring in five straight frames.

“I thought Will was terrific. He gave up one unearned run and then Miller was able to put some zero’s up,” said head coach Mike Bianco. “His curveball is good, you’ve seen it all year. He had better command today, we just couldn’t get him through that (ninth) inning.”

As good as Austin Miller was in the seventh and eighth innings, blanking the sizzling ‘Dores, he was on the damage was done on in the ninth. Miller loaded the bases before Ole Miss brought in Ryan Olenek. Olenek’s first pitch to Vanderbilt did it. A single up the middle scored the final run of the tournament. Final Score: 11-10 Vanderbilt.

Despite the loss, it’s great week for Ole Miss. Going 4-2 and making the championship game is incredibly impressive having played in the opening rounds Tuesday.

“It’s been an incredible week for us. They’ve played well all week – including today. One of the challenges is to get through this gauntlet of a tournament and get to this point,” Bianco said. “They gave it everything they had and left it out on the field.”

After batting 20 for 112 (.178) over the first four games of the SEC Tournament, Ole Miss really heated up on the weekend. The Rebels hit Georgia 11 times on Saturday and Vanderbilt another 9 times Sunday.

The 21 combined runs is the most in the SEC Tournament championship game history for the current format, breaking a record lasting since 1996.

One of the finest seasons in the history of Ole Miss softball came to an end Saturday night as... read more