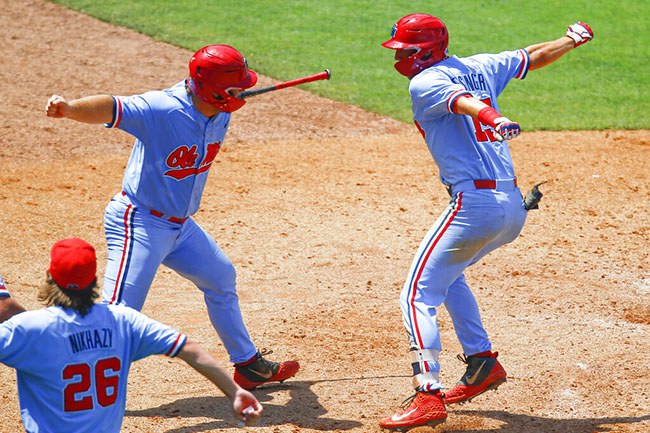 Ole Miss’ Grae Kessinger, right, celebrates with Thomas Dillard after hitting a two-run homer against Georgia during the fifth inning at the Southeastern Conference tournament on Saturday, May 25, 2019, in Hoover, Ala. (Butch Dill, AP)

OXFORD – Ole Miss is hosting a regional in Oxford for the ninth time in program history.

Ole Miss was announced as a 12 seed as the NCAA Tournament field was presented on television Monday morning. The Rebels were announced as a host school less than an hour following the conclusion of the 11-10 loss to the Vanderbilt Commodores in the SEC Tournament championship game.

Illinois is the two seed in Oxford, Clemson the three seed and Jacksonville State the four seed for the Oxford Regional. The Oxford Regional is paired up with the Fayetteville Regional, which is being hosted by overall five seed Arkansas.

Illinois (36-19) finished third in the Big Ten with a 13-9 record. The Illini went 0-2 in their Big Ten Tournament, but their regular season was good enough to secure them a two seed.

Clemson (34-24) finished fourth in the ACC Atlantic Division, 15-15 in the conference. The Tigers went 1-1 in the ACC tournament, failing to make it out of pool play.

The Tigers hit a lot of home runs. Two Clemson batters, Grayson Byrd and Logan Davidson, each have 15 homers on the season. They’ve hit 79 as a team on the season. Pitching wise, nine different Tigers have started games. Mat Clark (9-2, 2.84 ERA) is the consistent arm.

Jacksonville State (37-21), it’s their first Regional appearance since 2014 when they were also in Oxford. Coincidentally, that 2014 year was the last time the Rebels made it to a Super Regional. The team hasn’t lost since May 5.

All-in-all it’s not a bad draw for the Rebels. Thinking that hosting a regional may not even happen 24 hours ago, the Rebels landed the number 12 overall seed. As for the teams coming to Oxford, Illinois has an RPI of 26, Clemson is 38, and Jacksonville State is 89.

For the second straight season, Ole Miss is one of 10 SEC teams to make the NCAA Tournament. Ole Miss joins Vanderbilt, Georgia, Arkansas, Mississippi State and LSU as the six SEC teams to earn a host bid.

Illinois and Clemson will open the Oxford Regional action at 3 p.m. on ESPNU on Friday. The Rebels will then play against Jacksonville State at 7 p.m., which will be streamed live on the ESPN App.