Mayor Tannehill: The city and Oxford Police Department ‘are committed to transparency’ 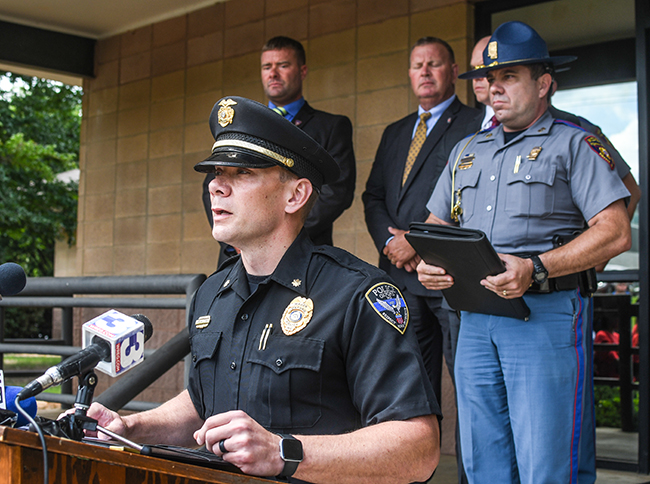 Oxford interim police chief Jeff McCutchen speaks about the death of Dominique Clayton, which has been ruled a homicide, at a press conference in Oxford, Miss. on Tuesday, May 21, 2019. (Bruce Newman, Oxford Eagle)

Oxford Mayor Robyn Tannehill has given her first comments regarding the murder of Dominique Clayton.

Clayton was found dead in her Brittany Woods area home and following an investigation, former Oxford police officer Matthew Kinne was arrested and charged with her murder last week. In what has one of the more higher profile cases to come to Oxford in quite some time, city officials have been quiet on the matter until a statement from Mayor Tannehill was released on Tuesday.

“Our community continues to mourn alongside the Clayton Family. Dominique Clayton was a mother, daughter, sister and friend and I simply cannot imagine the pain her family is dealing with right now,” Tannehill’s statement began. “We extend our deepest sympathies to Dominique’s family and friends. It is my prayer that this tragedy will unite us as a community.”

The Clayton family’s lawyer, Carlos Moore, held a press conference on the steps of the Lafayette County Courthouse last Friday. During his comments Moore thanked Mayor Tannehill and the Oxford Police Department for their support and swift action in arresting Kinne and supporting the decision to deny him bond. Moore also stated Mississippi Attorney General Jim Hood was assisting in investigating and speaking with Oxford Police officers pertaining to Clayton’s murder.

“On behalf of the City of Oxford, I contacted Attorney General Jim Hood on the morning of Friday, May 24th and requested that his office conduct an internal investigation, as well,” the statement continued. “These two entities (Mississippi Bureau of Investigation and Hood) will complete thorough investigations with the full cooperation and support of the Oxford Police Department and City of Oxford.”

Throughout last week and into the Memorial Day weekend rumors of other OPD officers being suspended or resigning in connection to Clayton’s murder spread. The OPD nor other city officials have responded to those rumors until Tuesday.

“As with any tragedy that occurs, there are many rumors that surface. We cannot discuss personnel issues but can confirm that the Mayor and Board of Aldermen have taken no action regarding suspension or termination of any officers other than the termination of  Matthew Kinne at the Board meeting on Tuesday, May 21st.”

Kinne is currently still in custody and being held at the Panola County Jail.