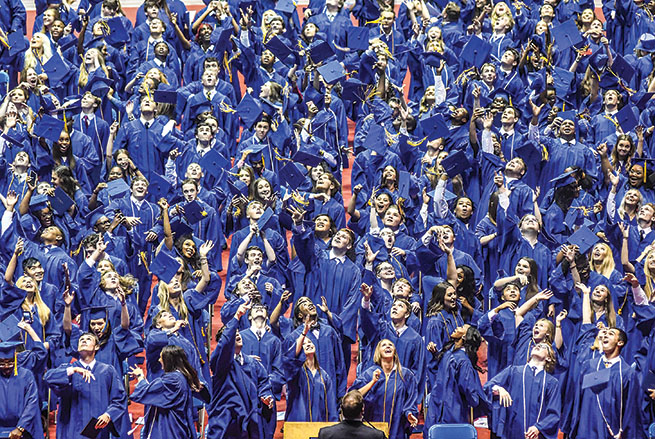 Oxford High seniors throw their caps in the air at the conclusion of their graduation ceremony at the C.M. "Tad" Smith Coliseum in Oxford, Miss. on Friday, May 24, 2019. (Bruce Newman, Oxford Eagle via AP)

The Class of 2019 was a special one for Oxford High School, and it was celebrated on Friday with its commencement ceremony inside the C.M. ‘Tad’ Smith Coliseum.

For the 266 seniors who were eagerly awaiting their diplomas, the night’s events also included time for reflecting on the past four years. A key theme among all the night’s speeches was to prepare for what’s to come, but do not forget what has already been.

“This is the unofficial opening of the doors to all that America promises to each of us,” Oxford School District superintendent Brian Harvey said. “Tonight, I want to challenge the graduates of the Class of 2019 to be effective communicators, culturally aware, ethical, critical thinkers, creative thinkers, personally responsible, active citizens and most importantly, resilient.”

This year’s graduating class boasted some of the school’s best numbers, academically.

During his speech, Harvey mentioned some of the academic accomplishments of this graduating class, including an ACT average score of 23.1, which is the highest mark by a senior class in the school’s history. There were 55 students who scored 30 or better on the ACT, 55 who graduated with special distinction and 43 who graduated with honors.

Following Harvey, student council president Olivia Rychlak welcomed her fellow graduates and their families. OHS valedictorian and salutatorian Marawan Elgohry and Siena Cizdziel, respectfully, each spoke to their peers about the journey they all just completed.

“Take a look at the faces around you. We’ve been around each other in some of the most important and transformative years of our lives,” Cizdziel said. “We’re part of a new and powerful generation that is not only witnessing change, but also playing a vital part in demanding it. As young people we have limitless potential.”

This year’s class president, Jackson Dear, gave the class farewell and continued the sentiment from the night’s previous speeches. Every speech made sure to include all of the highlights the class experienced the past four years, including when Bhanuka ‘Bono’ Jayaratna hit his now-infamous $500 half-court shot inside the gym two years ago.

There were special milestones for this year’s group of seniors. They were the 50th graduating class of Oxford High School, and they were the first to walk the halls of the new school four years ago. Nearly 90 percent of the class is attending college this fall, with others heading straight to the workforce and four enlisting into the armed forces to serve their country.

Clayton Family lawyer: We have questions that need answers