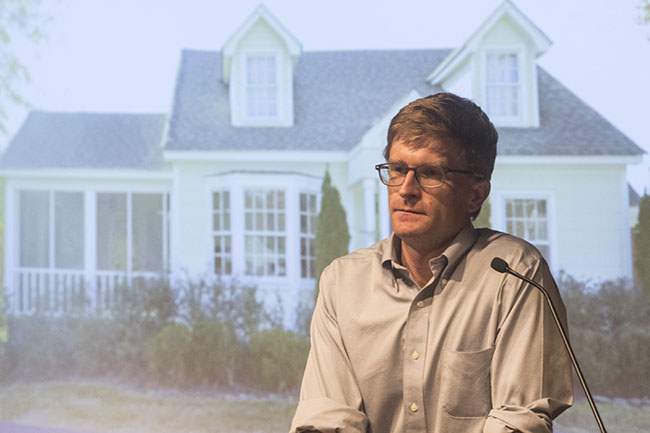 James Bridgforth of the Mississippi Dept. of Archives and History speaks at a public hearing concerning Avent Acres at the Oxford Conference Center in Oxford, Miss. on Thursday, May 23, 2019. (Bruce Newman, Oxford Eagle via AP)

Avent Acres, one of Oxford’s oldest neighborhoods is getting closer to becoming recognized as an important piece of history.

The second public hearing regarding Avent Acres becoming a historic district was held on May 23 at the Oxford Conference Center.

Nearly a year ago, the Oxford Board of Aldermen approved a request of permission to accept a grant from the Mississippi Department of Archives and History to survey the Avent Acres neighborhood. It was the first step in the process to see if the neighborhood is eligible to become a historic district.

The survey revealed the historic significance of Avent Acres comes more from its place in American history than the design of the original houses that remain on the property today. Memphis builder Wallace E. Johnson designed the neighborhood in partnership with T. Edison Avent in the 1950s. The purpose of the homes was to house World War II soldiers returning home once the war was over.

“I think it was a positive meeting and it was great to be able to answer everyone’s questions,” Kate Kenwright said. “I think the feeling was generally supportive about the nomination.”

Kenrwright is a historic preservationist with the City of Oxford’s planning department.

In a presentation by James Bridgeforth, an architectural historian of the Mississippi Department of Archives and History, he revealed there were three different types of homes designed in the Avent Acres neighborhood during its inception. The survey also found while many of the houses had small alterations, the majority of the original structures and framework remain sufficiently unchanged and the neighborhood retains the essential physical features.

Those in attendance had questions regarding the exact meaning and potential ramifications of Avent Acres’ addition to the National Register of Historic Places. The audience also asked for clarity regarding the differences in a national district and a local district.

“What we’re doing is we’re documenting,” Bridgeforth said. “This could be a planning tool for the City of Oxford and Lafayette County. We’re not really implementing any rules. We don’t have the authority to do that. We think it’s a great honor to be on the national registry, but we can’t tell you what to do with your property.”

Being on a national registry allows the ability to block the federal government from trying to build a road through the neighborhood or any kind of imminent domain issue that could arise. A local district means the city could put rules in place that would not allow homeowners the ability to do certain things with their property.

Representatives of the city’s planning commission who were on hand assured those in attendance there are currently no plans in place to propose such a plan.

As the next step, the Board of Aldermen will vote whether or not to move forward with the nomination process. If the City of Oxford decides to move forward, then the nomination will be presented to the review board of the Mississippi Department of Archives and History on July 18 in Jackson.

Mayor Tannehill: The city and Oxford Police Department ‘are…