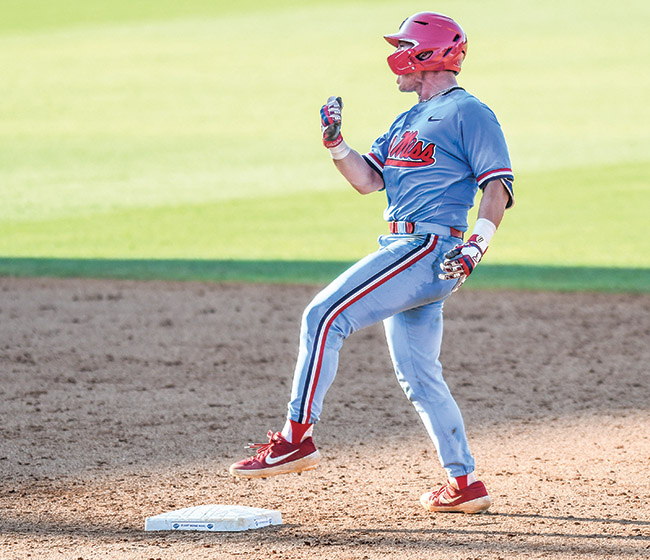 Ole Miss’ Cooper Johnson reacts to hitting a double against Vanderbilt in the championship game of the SEC Tournament at the Hoover Met in Hoover, Ala. on Sunday, May 26, 2019. Vanderbilt won 11-10. (Bruce Newman, Oxford Eagle)

Coming off a tough loss in the SEC Tournament championship game, Ole Miss catcher Cooper Johnson was both emotional and introspective.

Sometimes after a loss, players are angry or short. They’re not bad guys; they’re just understandably upset. No one likes losing. Sunday was a little different. Following a 4-2 run to the SEC Tournament championship game in Hoover, Johnson and Thomas Dillard were reflective, thoughtful even, on the podium.

“At some point, something kind of switched. I’m not sure and I don’t think anyone’s really sure exactly when it flipped, but we just started to play differently,” Johnson said, talking about going from a losing stretch to end the season into a fantastic run in the tournament. “When you start to play differently, you start to believe. And when you start to believer then anything can happen. You see some mid-major teams making these big runs in the postseason. That’s not because they’re more talented than the other team, maybe they are, but I’d put my money on that it’s almost all belief.”

Losing six of seven games to end the regular season, Ole Miss needed to flip that switch. They sure did it in Hoover. Talented teams can do this at times – coast for stretches before turning things up before it matters most. However, it doesn’t seem like that is what happened. It seems more like there were real issues they needed to overcome.

My favorite part of the @OleMissBSB run in Hoover came Sunday after the loss. Hard not to get romantic about baseball #RebsBSB pic.twitter.com/VifkUKLPLh

“We might have had some confidence issues. It felt like things weren’t going our way at the end of the year. But this week just shows us what we’re really capable of and we’re a dangerous team,” said junior Thomas Dillard. “We just have to be consistent and believe and I think we have the talent to do that.”

There were no confidence issues in the SEC Tournament, if anything there was the opposite. The Rebels took the rally cap to a new level, breaking Gatorade cups to fit over their ears or eyes and using traffic cones as fake weight-lifting bars. After a rough stretch of losing, they were having fun playing baseball again.

“I don’t know when the exact point was. But somewhere during this week I think you saw them start playing different, acting different. That’s the belief (Cooper) is talking about,” said head coach Mike Bianco. “Certainly winning makes you feel better, but we’ve won before. Somewhere along the line here we started playing better and you can sense a different feeling in the dugout.”

The timing couldn’t have been better. If there were no SEC Tournament run in Hoover, there would be no Oxford Regional. If there were no Oxford Regional, things may play out differently over the next few weeks. After how the season ended, many thought Ole Miss wouldn’t even be hosting. They needed that 4-2 run in the SEC tournament, including wins over two top-10 teams, to get back in the national conversation.

Now, they’re hosting a regional for the ninth time in program history. No one on this team has made it past this point, and a lot of them have experienced losses on this stage in the most brutal way possible. They’re going to need to dig back into that belief going into this weekend’s regional.

“At some point, we switched from that six-game losing streak where we didn’t really believe to this week where we started to believe. We knew we were going to win,” Johnson said. “It’s a veteran club and we knew it was coming all along. It was just a matter of when. And I think it’s happening at the best possible time it can. I’m super proud of the way we went out (of the tournament) and what’s to come. We have a lot of baseball left.”