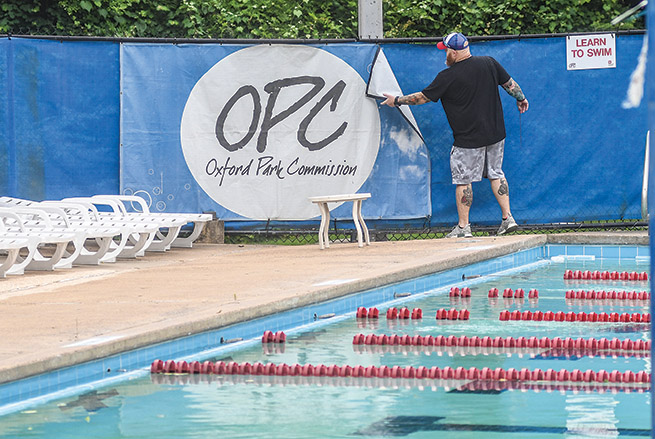 Oxford Swimming Pool director Kris Brasher gets the pool ready for its opening, in Oxford, Miss. on Thursday, May 30, 2019. The pool will open Friday. (Bruce Newman, Oxford Eagle)

Summer can officially begin in Oxford. The Oxford Park Commission announced the city pool would open on Friday after a six-day delay.

The pool was originally scheduled to open on May 25, just in time for Memorial Day weekend, but repairs to the areas of the pool were not completed and OPC had to keep the pool closed another week. The repairs included fixing the tile that wrapped around the top of the pool, but when workers would place a tile, two or more would fall back off.

With OPC wanting to have the pool open and not remained closed any further than it already had been, a full work crew came in and got the job completed earlier this week.

“We were fortunate enough to be right at the timeline (OPC director Seth Gaines) thought it would be,” John Davis, OPD community relations director, said. “We’re glad that everything worked out. We got the improvements made to the pool so that everybody can enjoy them and we didn’t have to delay any longer than necessary. We definitely apologize and we hated the delay but at the same time the work has to get completed for us to open up.”

This year marks the 40th anniversary of the city pool with most of the original tiles and other parts of the pool still intact.

The pool will open at 1 p.m. on Friday and begin its normal operating hours. To make up for some of the lost time with the delay, there will be extended hours on certain days throughout the summer. Today the pool will remain open until 7 p.m., instead of its normal closing time of 6 p.m. The same will take place on June 10, 12, 14, 24, 26 and 28 as well as July 1,3,5, 29 and 31. The first two days of August will also have extended hours.

Once school resumes in August the pool will open only on the weekends until it is closed for the season after Labor Day.