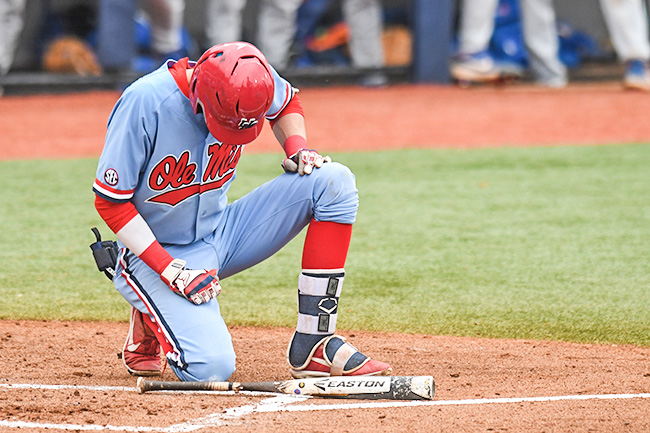 Ole Miss’ Ryan Olenek reacts to being hit by a pitch against Florida at Oxford-University Stadium in Oxford, Miss. on Saturday, April 6, 2019. (Bruce Newman, Oxford Eagle via AP)

For much of the year, the race to be hit by pitches was a running joke in the Ole Miss press box. Having been hit a ridiculous 16 times this season, it’s something that’s also been on Rebel senior Ryan Olenek’s mind for much of his time at Ole Miss.

“I’ve always thought, ‘why does the skinniest kid on the field get hit?’ I don’t know. I think it’s because I stand so close to the plate and I don’t really get out of the way of the ball. It’s not that I try to get hit, but I’m not going to get out of the way,” Olenek said. “I really like getting hit. Hit me in the upper body. Anything in the lower body will break me.”

Olenek has been hit 16 times this season and 39 times in his Rebel career. This season, he’s being hit nearly 7-percent of his plate appearances. It doesn’t seem like much, but it’s a preposterously high number.

“People don’t like him,” joked head coach Mike Bianco. “He’s got a lot of long limbs and a lot of body parts. Even though he’s skinny, it’s a lot of limbs hanging over the plate.”

This past weekend in the SEC Tournament, Olenek was hit once in the front of the knee with a fastball then later in the back of the knee with a slider. He says the back-knee one hurt worse, but that pretty much every step came with a little bit of pain.

“Did I hit 40 yet? I’m not a math guy. I think I’m at 39 or 40,” Olenek joked, talking about his career HBP numbers. “It’s alright. It’s just bruises. Nothing ever bad has ever come out of it except a couple of lingering issues.”

The lingering issues have been relatively serious this year. Olenek got hit by a pitch in the hip during SEC play against Florida, an injury that would later flare up after falling on the hip following running into the center field wall. Olenek would actually miss a handful of games dealing with that hip.

There are actually a few good reasons for Olenek getting hit. Despite being the 6-foot-4, 185-pound skinny kid at the plate, Olenek stands really close to the plate in his at-bats. He also has just those dangly, gorilla arms that you can expect from a lanky 6-foot-4 kid.

“A lot of pitchers try to throw in on long-arm guys. You don’t want a guy to get extension. So my scouting report, I’m assuming, is to throw hard-in and soft-away. A lot of pitchers don’t feel comfortable throwing in, so they just sail it.”

As far as actual baseball goes, being hit is great. It does the same effect as a single or a walk, and as Billy Bean taught us over a decade ago, there’s nothing more valuable in baseball being on base.

Where should you hit Ryan Olenek? He prefers the upper body. Upper body muscles you can tense up in time and hurt less. Lower body muscles are harder to flex in the short amount of time. The only thing we can know for sure is that Ryan Olenek will not be shying away from fastballs in his direction during the Oxford Regional.