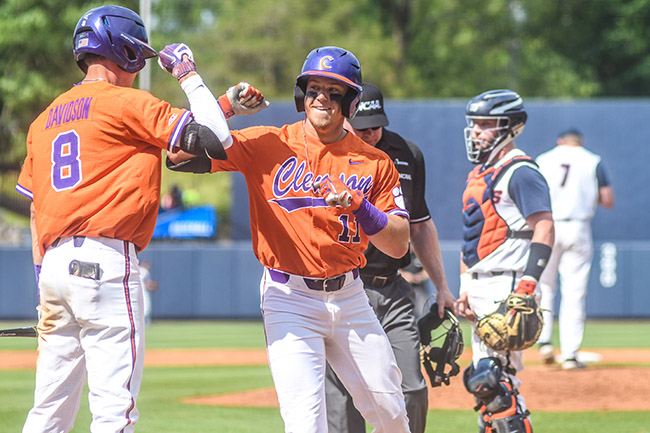 Clemson's Michael Green (11) hits a home run and is congratulated by teammate Logan Davidson (8) against Illinois in the NCAA Oxford Regional at Oxford-University Stadium in Oxford, Miss. on Friday, May 31, 2019. (Bruce Newman, Oxford Eagle via AP)

Clemson’s bats came alive and Davis Sharpe shut down Illinois in the Tigers’ 8-4 win to open the Oxford Regional on Friday.

The Tigers scored eight runs off 12 hits to move themselves into the winners’ bracket in the double elimination format. Clemson (35-24) will play the winner between Ole Miss and Jacksonville State at 6 p.m. on Saturday.

Illinois will play the loser in an elimination game at Noon on Saturday.

Going with the decision to start junior Jacob Hennessy on the mound, Clemson leaned on the lefthander for two and 1/3 innings before going to freshman Davis Sharpe. Hennessy was responsible for three of Illinois’ runs.

Sharpe worked the final six and 2/3 innings, pitching a shutout and striking out four Illinois batters. He gave up an unearned run in the ninth inning off a passed ball.

Catcher Kyle Wilkie went 4-for-5 with 3 RBIs for the Tigers. First baseman Grayson Byrd also had 3 RBIs and went 3-for-5 at the plate.

Junior righthander Ty Weber got the start for Illinois, working four innings and giving up four runs off six hits. From there, head coach Dan Hartleb piecemealed the final five innings with six different pitchers. Nobody worked more than an inning.

Clemson will send their ace to the mound on Saturday night with Mat Clark getting the start. Clark has an ERA of 2.84 and struck out 59 batters in 69 and 2/3 innings of work.