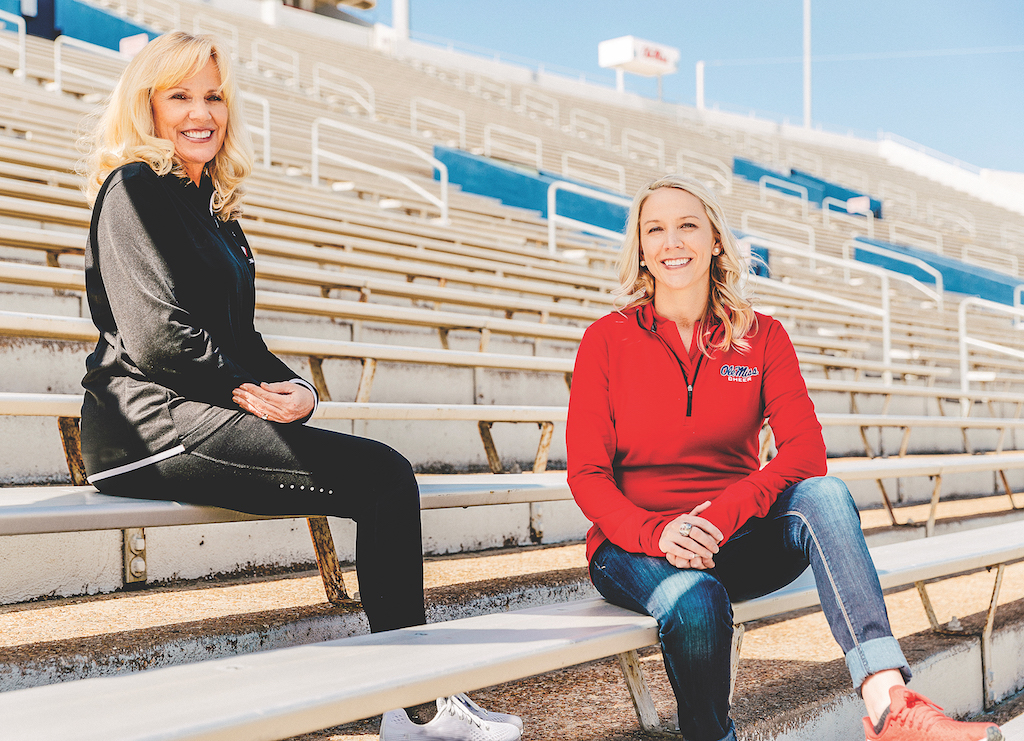 Ole Miss Cheerleading Head Coach Ryan O’Connor and her mother, Donna Martin, have been in the reality television and cheerleading arenas for more than 20 years, most recently in LifeTime’s new series, “Cheerleader Generation.”

Martin has been the cheer coach at Dunbar High School in Lexington, Ky. for the past 30 years – since before O’Connor was born. O’Connor cheered under her mother’s direction at Dunbar, and later went on to cheer at the University of Alabama before entering the world of collegiate cheer coaching.

The mother-daughter duo were first featured in season one of MTV’s “True Life” series after being contacted by producer Laurie Girion. About six years after that first 45-minute documentary, Girion’s career took off in Los Angeles and she contacted the pair once again with a pitch for a show on LifeTime, called “Cheerleader Nation,” which centered around their mother-daughter dynamic in the midst of a championship high school cheer squad.

It’s their relationship with Girion, O’Connor said, that led to “Cheerleader Generation.”

“(Girion) called last spring and said it would be really fun to come back and do a show where we’re both coaching,” O’Connor said. “We wouldn’t have said yes to doing something like this if we didn’t know the producer, and know she was someone who understood cheerleading and respected the schools we work for.”

The show filmed in Oxford for one week every month between May 2018 and March 2019, following the cheerleaders and their coaches through tryouts, game days and competitions.

The dynamic between O’Connor and Martin is definitely reality television-worthy. One one hand, Martin leads an eight-time national champion high school team as a highly decorated, seasoned veteran of the sport. On the other hand, O’Connor has only seven years of collegiate cheer coaching under her belt, and is the youngest cheer coach in the SEC earning respect from her peers and for the Ole Miss program.

Add in the personal touch of cheerleaders from the Dunbar High School and Ole Miss co-ed teams, and it’s a combination O’Connor said is charmingly humanizing and relatable for viewers.

“You’re going to see real people and real life stories that we all go through, but cheerleading is the one thing that brings us all together,” she said. “I think everybody can connect to someone who’s featured on the show, whether it’s me and my mom or one of the Ole Miss cheerleaders or one of the Dunbar cheerleaders.”

Cheerleaders are no strangers to putting on a smiling face and being performance ready all the time, but O’Connor said it’s important to remember – especially at the college level – the team members are students first and foremost. Yes, they’re at every game, pep rally and marketing event, but they’re also hitting the books at the library, going to class and earning their degrees.

This balance can be seen firsthand with the five Ole Miss cheerleaders featured on the show, but it’s a reality that rings true for the entire squad, she said.

“I hope our viewers, especially those in the Oxford community, will see how hard these student athletes really work,” O’Connor said. “We don’t have a set season. They truly, in my opinion, work harder than anyone else. I think it takes a very special person to be a collegiate cheerleader, and I think you learn that through a program like my mom has.”