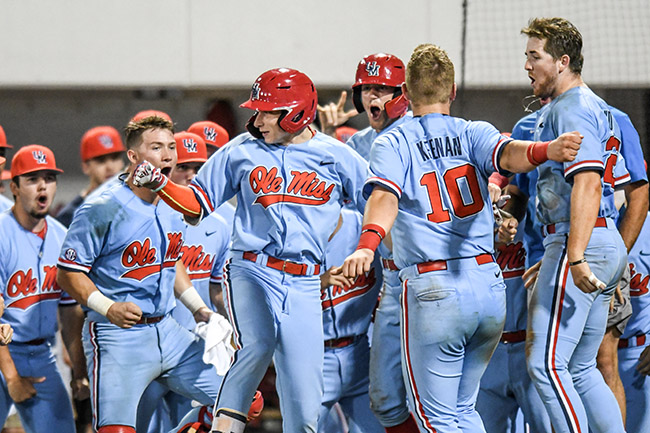 OXFORD – Ole Miss got back to their winning ways in Hoover, but they did so behind pitching. The Rebels are getting great outings on the mound to start the Oxford Regional, but they’ve also found their power hitting that had lay dormant most of May.

Beginning on May 10, the start of the series with Mississippi State, Ole Miss had played 13 baseball games before the start of regional play. Over that thirteen-game stretch spanning the end of the regular season and their six games in the SEC Tournament, Ole Miss hit just five home runs.

In the first two days of the of the Oxford Regional, Ole Miss has hit six home runs.

It’s not a Rebel team incapable of hitting home runs. This stretch isn’t entirely surprising. It’s just noteworthy given the timing coming right as the NCAA Tournament gets under way.

“I’d say it’s (contagious). Our lineup is getting more consistent where we’re starting to stick to our approaches,” said Cole Zabowski. “We’re just trying to do some damage and that’s what happens when we stick with our approach.”

Ole Miss has hit six home runs in a two-game stretch before this season. Back in February, they had a four homer and a two-homer day back-to-back in a three-game series against Tulane in which they scored 24 total runs. In their series at LSU nearly a month ago, they hit five in three games.

One of the interesting notes on this two-game stretch is just how diverse it is. Each of Anthony Servideo, Tyler Keenan, Thomas Dillard, Cooper Johnson, Cole Zabowski and Kevin Graham have gone deep this weekend.

Some of it is expected sources – Tyler Keenan, who hit his fourteenth homer on the season Friday, leads the team. Anthony Servideo, who also hit a homer Friday, has hit just two all year. Kevin Graham’s homer on Saturday pushed his season total to ten, a remarkable double-digit number for a freshman.

“We knew that there was some pop in that bat, we knew when he committed years ago,” Bianco said about Graham. “You hope and you think that (the power) is there. But obviously we didn’t see too much because he didn’t start (at the beginning of the year). Maybe if the coach would’ve put him in earlier he’d have a lot more (than 10).”

And let’s be honest, those home runs are just fun. Swayze Field was packed to the brink of over 10,000 fans on Saturday. And there really isn’t anything that gets those kids in right field going like a beer shower or three.

“As much as coaches speak and we talk about quality at bats and grinding it out getting base hits, everyone likes home runs,” Bianco joked on Friday.

Ole Miss is now just one win away from winning the Oxford Regional. A few more of those right field beer showers on Sunday night would be welcomed with open arms.