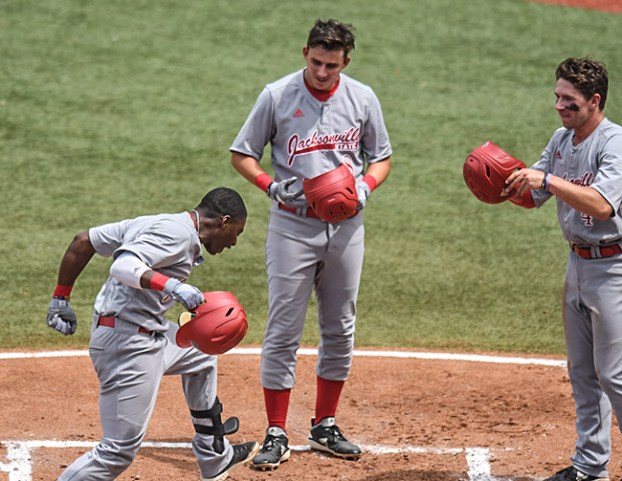 Jacksonville State’s stomps on home plate after hitting a three run home run against Clemson in an elimination game in the NCAA Oxford Regional at Oxford-University Stadium in Oxford, Miss. on Sunday, June 2, 2019. (Bruce Newman, Oxford Eagle via AP)

Before Saturday Jacksonville State had never won an NCAA Tournament game. The Gamecocks have now won two and are two wins away from their first Super Regional.

Jacksonville State defeated Clemson 9-2 in the second elimination game of the Oxford Regional on Sunday to advance to the regional final against Ole Miss (Sunday, 8 p.m. CT).

A four-spot in the second inning gave the Gamecocks (39-22) the lead and were able to hold off a brief rally by Clemson (35-26) in the bottom half of the frame. The Tigers scored two but were shut out the final seven innings.

Missed opportunities told the story for Clemson, who stranded 11 runners on base and went 2-for-9 with runners in scoring position. They were 3-for-16 with runners on any base, leaving them loaded to end an inning three different times.

The offense continued to click for the Gamecocks, scoring two runs in the fifth and seventh innings and another run in the eighth.

Leadoff hitter Tre Kirklin went 1-for-5 but was responsible for 4 RBIs, including a three-run home run in the second inning. Shortstop Isaac Alexander went 3-for-2 and had 2 RBIs.

Jacksonville State leaned on three pitchers to get them to Sunday night’s final. Starter Dylan Hathcock worked 4 1/3 innings, giving up two runs off six hits while striking out two. Corley Woods and and Michael Gilliland worked the final 4 2/3 innings of shutout baseball.

Ole Miss opened the Oxford Regional against the Gamecocks, defeating them 16-2 on Friday night. Jacksonville State will have to defeat the No. 12 National Seed twice to advance to next weekend’s Super Regional round.

This marks the second consecutive year Ole Miss will play a team from the Ohio Valley Conference to decide a region championship.

OXFORD – Ole Miss got back to their winning ways in Hoover, but they did so behind pitching. The Rebels... read more