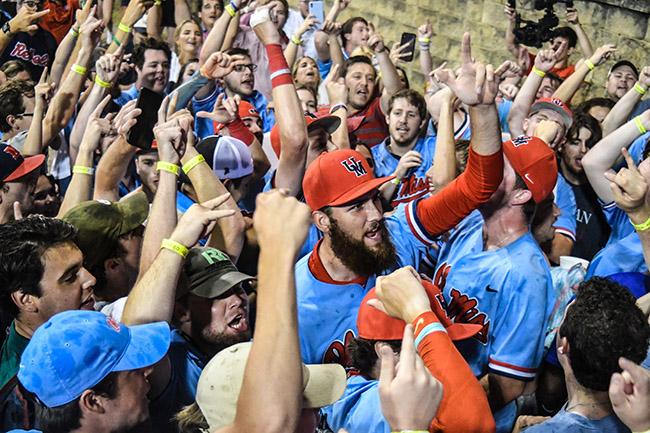 Mississippi's Austin Miller, his teammates, and fans celebrate a win over Jacksonville State in the NCAA Oxford Regional at Oxford-University Stadium in Oxford, Miss. on Monday, June 3, 2019. Mississippi won 19-4 to advance to the Super Regionals and will face Arkansas. (Bruce Newman, Oxford Eagle via AP)

OXFORD – The 2019 Oxford Regional came to a close in the same way it started, with Ole Miss hitting quite a few home runs and abusing Jacksonville State in the process. They’re on to their first Super Regional since 2014.

“I’m just really proud of the team and how way we played this weekend,” said junior Thomas Dillard. “We came out and took care of business and I think we played as well as we could… it’s a great feeling knowing we got another weekend verses Arkansas. It’s going to be a fun series but I’m proud of the boys and exited to see what’s coming.”

Ole Miss beat the Gamecocks 19-4 on Sunday night, a literal nightcap on a weekend of baseball that couldn’t have been played more perfectly for the Rebels.

Home runs were a massive part of the Ole Miss success in the Oxford Regional this weekend. On Sunday, it was Thomas Dillard flexing his forearms. Dillard hit two homers Sunday, pushing his weekend total to three. Ole Miss hit nine on the weekend. His home run in the fourth inning was a grand slam, pushing the Ole Miss lead to 12-2 at the time. Anthony Servideo also added his second homer of the regional.

As much as the night was about Thomas Dillard and his ludicrous seven runs batted in, it should be as much about the Ole Miss control in the batters box. The Rebels drew a silly number of walks – 15 to be exact.

Servideo alone drew four walks, tying an Ole Miss single-game record. It’s those walks that helped the Rebels amass 35 base runners leading to 16 runs batted in on the night.

Having used just two pitchers apiece in each of the first two games of the regional, nearly every reliable bullpen arm would’ve been available to Mike Bianco and the Rebels on Sunday night. They didn’t need half of them. Ole Miss got 5.1 innings from Gunnar Hoglund, who gave up just one earned run on five hits before being replaced by Houston Roth in the sixth.

The Oxford Regional cap on Sunday night looked awfully familiar to the way they began the weekend. Ole Miss needed to play just three games in the regional, winning all three, to advance to the supers. They beat this same Jacksonville State team 16-2 on Friday night and Clemson 6-1 the night after. The 41 runs scored in the regional is the most in program history.

Just one year removed from the Monday blowup that led to Ole Miss losing the regional in two games to Tennessee Tech, Ole Miss has its redemption. For every single guy on this team, it’s the first time they’ve reached supers despite hosting a regional in both 2016 and 2018.

“We just played really well this weekend. That’s it in a nutshell,” Bianco said. “In all phases, from pitching to defense, I don’t think we made an error all weekend. In three games we gave up seven or eight runs and we scored a ton of runs. I’m just proud of the way our guys competed.”

The regional win is Ole Miss’ first since 2014. They’ll be playing in their sixth Super Regional in program history. The team will travel to Arkansas next week for a Super Regional matchup against a team they have played extremely well this year. The Rebels are 3-2 against No. 5 national seed Arkansas this year. They were the only team this year to win a series in Fayetteville.