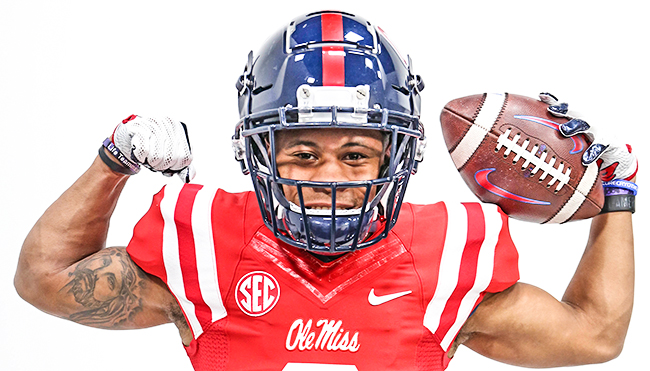 As first reported by ESPN’s Tom VanHaaren, Ole Miss baseball and football signee Jerrion Ealy will officially be a mainstay in Oxford.

The two-sport star has reportedly notified teams that he plans to stay at Ole Miss after not being selected in the first round in the MLB Draft. Ealy was at one point ranked in the MLB Pipeline top-20 but fell out of the top-50 as the draft approached due to teams fearing they may not be able to sign him.

“HYDR!!!” the tweet read. An abbreviated “Hell Yeah, Damn Right” are from a line in the Ole Miss “Hotty Toddy” chant.

Ranked as the No. 19 overall player in the 2019 football recruiting class by ESPN, Ealy was the top rated player in the state of Mississippi. He arrived on campus earlier this week and will likely fit in seamlessly into the Ole Miss backfield at running back. Despite being just a freshman, it’s hard to imagine the highly-touted prospect won’t make an immediate impact.

As a baseball player, the outfielder was once thought of as a top-10 selection in the MLB Draft. Now he’ll be a Rebel for at least three years. Perfect Game’s scouting report of him describes Ealy as exhibiting “dynamic raw bat speed, raw swing mechanics but unmistakable elite ability to drive the ball, big power potential from foul pole to foul pole.”

As a senior at Jackson Prep, Ealy hit .373 with an on-base percentage of .527 to go along with six home runs. As a football player, Ealy ran for over 5,000 yards and caught over 1,400 receiving yards in high school. He scored 73 touchdowns at Jackson Prep.

Ealy was highly sought by Alabama and Clemson, among others, but chose to commit to Ole Miss due to his ability to play both football and baseball at a high level. Now Jerrion Ealy seems to be officially a Rebel.