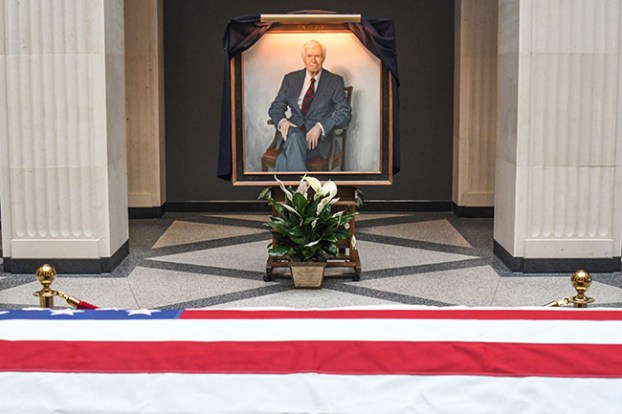 The body of former U.S. Senator Thad Cochran lies in state in front of a portrait of the senator, at the Robert C. Khayat Law Center at the University of Mississippi in Oxford, Miss. on Sunday, June 2, 2019. Cochran died on Thursday in Oxford. (Bruce Newman, Oxford Eagle via AP)

Cochran passed away last Thursday at the age of 81 in a veteran’s nursing home in Oxford. The former senator earned his bachelor’s degree in 1959 and a law degree in 1965 from Ole Miss.

Following Sunday’s visitation, Cochran’s body was escorted to Jackson by the Mississippi Highway Patrol honor guard on Monday morning for two funeral services scheduled. One was held on Monday at the Mississippi State Capitol and a second service will  at the Northminster Baptist Church.

Ole Miss Cheerleading Head Coach Ryan O’Connor and her mother, Donna Martin, have been in the reality television and cheerleading... read more