John Currence to open new restaurant on the Square 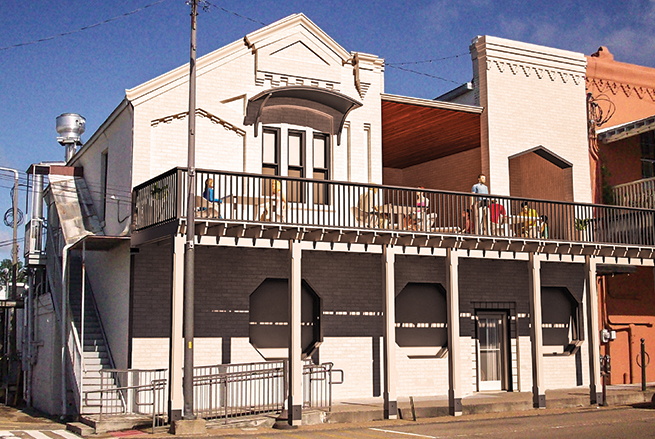 A rendering of the New Orleans-inspired restaurant that chef John Currence is planning to open at 208 South Lamar Boulevard.

The building at 208 South Lamar Boulevard might be viewed as cursed by some people, but John Currence sees the building as an opportunity.

The Oxford chef is in the process of opening his fifth establishment in town, and third on the downtown Square, with a New Orleans inspired restaurant.

Currence, and building owner Tim Smith, presented plans to renovate the 139-year-old building at Monday’s Courthouse Square Historic Preservation Commission meeting. The commission did not approve their request for several exterior changes flat out, but Currence said they were ‘largely in favor’ of the renovation plans and wanted them to make some design modifications to the drawings submitted.

The plans include adding a new wood and steel balcony to the outside of the structure that faces South Lamar and installation of a new masonry opening on the second floor. Currence will also overhaul the interior on both floors. The second story is currently an apartment.

“They’ve given us the thumbs up to do some redesign work and to pass it around to them to consider before the next meeting,” Currence said. “There are severe structural issues with the building. That wall that is technically the back of the building looking at it from the street is falling down. So, we have to surgically remove that entire wall while keeping the rest of the structure intact. It’s going to be a longer process.”

Featuring po-boy sandwiches and oysters, Currence wants to bring the flavor of New Orleans back to Oxford. Something he feels is lacking. The menu will offer other items and the full concept of the restaurant is still being discussed by Currence and his City Grocery Restaurant Group.

“We’ve got a challenge in ourselves. It’s going to a little more ambitious than just a po-boy shop,” Currence said. “What I’m for as we’re building this is the foods I grew up with as a kid in New Orleans, and those places seem to be disappearing very quickly. We’re calling it sort of a po-boy and gumbo shop.”

A name for Currence’s latest restaurant has not been officially decided.

In recent years, the building has been home to several other restaurants that have not had very long stays on the Square. The most recent restaurant to occupy the space was Stella Restaurant and Bar. LaPaz, a Mexican restaurant, Kelly English’ Second Line and restaurant called 208 have all tried their hand at success in the building, but had little luck. Other shops that have spent time in 208 South Lamar include Grundy’s and Smitty’s.

“I’ve always loved that building and I’ve gone into so many spaces in the last 25 years that folks want to call ‘cursed.’ I don’t believe in that,” Currence said. “When you look back over the years and the things that have been in there, they’re either just poorly managed or poorly executed. If Russell French was still here running 208 like he did when he first opened, it would be a 20-year-old stalwart in the community. I think we present ourselves the right way and we put together the best management team that we can. It’s a great location and a great old building, and I don’t think there is any reason that it shouldn’t be successful.”

Snackbar chef and recent James Beard Award winner Vishwesh Bhatt will be an operating partner with Currence and together will serve as the ‘backbone’ of the daily operations of the restaurant. With the extensive renovations and modifications planned, there is not a set timeline for when the restaurant is scheduled to open.