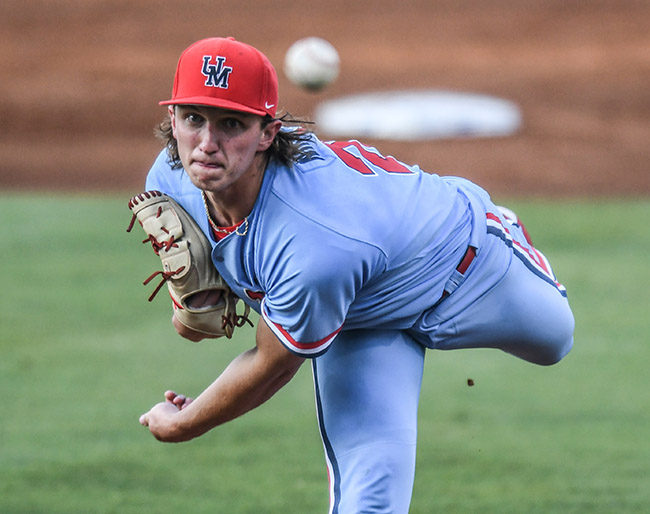 SEC ballparks are essentially a petri dish, the breeding grounds for ‘bro-country.’ Luke Bryan and Florida Georgia Line percolate from the speakers of Swayze Field and Alex Box Stadium in between just about every inning. But that’s just not Doug Nikhazy. He prefers Nirvana or Pink Floyd.

This weekend, when Nikhazy takes the field at Baum-Walker Stadium in Arkansas for the Super Regionals, he’ll warmup to Rooster by Alice in Chains. The grunge rock song from 1992 is a pretty stark divergence from the norm, but it’s just one in a handful of quirks that makes Nikhazy one of the more interesting personalities on the Rebel team.

“I’ve always done a ‘90s rock song as a walk-out. Sometimes I’d venture into the ‘80s,” Nikhazy said. “My favorite one ever was my sophomore year of high school which was ‘Time’ by Pink Floyd. This year (Rooster) just kind of clicked. I’ll probably do another ‘90s rock song again next year. I’ll stay in that era.”

But it’s not just the song playing when Doug Nikhazy warms up that’s a little different – it’s the whole warmup process. When Nikhazy goes from the dugout to the mound to start an inning, he does so in a sprint. It’s a routine that he says started due to early-morning games back in his sophomore or junior year of high school. At first, it was just a way to wake up and loosen his legs.

Now the sprint out happens every game at Ole Miss, three years later.

“Just like all superstitions, it happened and then my brain realized it was happening,” Nikhazy said. “It was like an 8 a.m. start for a summer game. I sprinted out to the mound and I think I struck out three that inning. I came off the mound and was like ‘wow I need to start doing that every time.’ And it was just my best start of the summer.”

Call it a superstition or call it a habit, it’s hard-wired enough into his brain that not getting to the perfected routine flawlessly throws off the entire process. During a start at Tennessee to end the regular season, Nikhazy rolled through three innings, giving up one hit and facing only ten batters to get the first nine outs.

When he ran back to the mound in the fourth inning, the ball was nowhere to be found. The Tennessee fielder accidentally carried it into the dugout following the inning. The whole thing threw off Nikhazy’s routine. He walked the first batter and the Volunteers scored three runs in the inning.

“I happened to give up three runs that inning,” Nikhazy said, half joking. “But obviously no correlation there. None at all.”

The quirks and idiosyncrasies go beyond the diamond. Doug Nikhazy isn’t your stereotypical baseball player.

Really, this part all goes back to high school. A senior at West Orange High School in Florida, Nikhazy was the class president and on a national debate team. At one point, he coordinated a dance marathon that raised around $80,000 for a branch of the Children’s Miracle Network Hospitals.

That time balance wasn’t always easy, juggling extracurriculars with schoolwork and baseball. He had to miss duties as class president to attend baseball practices. Even on the field and in the locker room, Doug was just… different.

“He is probably the only baseball player that I have coached that rides a skateboard.  He also had a stage his junior year when he was into camping and walking tight ropes tied to trees,” Jesse Marlo, Nikhazy’s high school coach, said. “I would usually find him sleeping in a hammock like a cocoon tied to both sides of the lockers in our locker room before pregame.”

Despite all this, when it came to selecting a college, Nikhazy said it was all baseball. He’s very interested in political sciences, something he knew back in high school and what he plans to major in at Ole Miss. But the decision was all baseball.

All that said, even Mike Bianco didn’t get full-time Doug Nikhazy during the recruiting process.

“Doug wasn’t even on our official visit. So, the first time I met him was when he got here in the summer,” fellow freshman Kevin Graham said. “He missed our official visit for a debate tournament. So that kind of tells you he’s not the not the normal guy.”

The phase Marlo mentioned where Doug would walk tight ropes tied to trees – that never really ended. It’s called slacklining. Essentially, it’s a tight rope maybe two inches wide that you tie between two trees fifteen feet or so apart. It’s set up about knee-high off the ground and you try to walk across it.

One of the first things Nikhazy did when he got on campus was attempt to teach the craft to some of the other freshman.

“The first week of the summer I went and took our whole freshman class to The Grove and set my slackline up between a few trees. They’re all like ‘what the hell is this kid doing?’ It was so funny,” Nikhazy said. “Kevin (Graham) wasn’t that bad. He was fine. Josh (Hall) was probably the best.”

Nikhazy may not have thought Graham was that bad, or maybe he was just being nice. Graham himself described the activity as “impossible” and “terrifying.” He adds that Nikhazy also has a pension for a sort of cliff jumping, or at least jumping from high spots into a body of water. Doug still skateboards to class, but he has a longboard now.

Away from the field, the freshman are pretty close knit. Nikhazy rooms with fellow pitcher Jacob Steinberg and is really close with Kevin Graham, Josh Hall and Knox Loposer. Graham is the facilitator and Loposer is the logical type that keeps things grounded. Hall is the one that’s always on the go. Unsurprisingly, Nikhazy is the hypothetical thinker type that’ll insert a weird, theoretical question randomly into conversation.

“I’ll usually just throw a wrench into the conversation just to rile everyone up… They probably picked up my vibe a little later. We’re all still trying to figure out who each other were in the summer,” Nikhazy said. “Once we got in the dorm rooms, just messing around with all of (the freshman) was my favorite times all year.”

It’s these warmup superstitions and quirky activities are just part of what make Doug Nikhazy a key piece to Ole Miss’ success this year. Ole Miss head coach Mike Bianco making the decision to move Nikhazy into the Saturday starter role was one of the biggest turning points of the Rebel season.

Junior College transfer Zack Phillips started the season on the mound on Saturdays in what is now “Doug Day,” his typical Saturday start. Phillips wasn’t a disaster by any means, but he wasn’t the stabilizing force the Rebels needed. Phillips has adapted to being a critical fourth starter for Ole Miss, while Doug Nikhazy is the oil in middle of the rotation making gears turn smoothly.

“It stabilized us. Going into the spring, Doug was one of the maybe five candidates that could start on the weekend,” Bianco said. “We went in a direction with some of the older guys, but you could see it (with Doug). Out of the bullpen down in Tulane and some of the other tighter outings where he was terrific. But we thought we needed some help on the front end of games.”

Nikhazy made his first start in a mid-week game against East Carolina. He then went out and started one week later against Louisville. The Rebels lost both games, but both schools would go on to host regionals in the NCAA Tournament. Against Louisville, he allowed two runs in the first inning before throwing the next five, allowing only one more run. It was enough to show Bianco and Co. that he was the answer in the Saturday starter role.

“My senior year of high school I heard some horror stories from some friends about not being able to play. I thought, I could easily end up being like that. I knew this team was one of the best in the country,” Nikhazy said. “But it just so happened that I kind of found my spot. It’s really been awesome.”

Since being all but named the Ole Miss Saturday starter, he’s gone 5-2 with a 3.44 ERA against SEC opponents. Just this week, both Doug Nikhazy and Kevin Graham were named to the Collegiate Baseball Freshman All-American team.

The freshmen have seamlessly integrated themselves into this Ole Miss team as super regionals approach. Nikhazy is a critical No. 2 starter and Graham is in the lineup at designated hitter or on first base nearly every game. Graham is hitting.259 but adds impressive power from a freshman with ten home runs.

It took time, and it’s probably good both for Ole Miss and for Doug Nikhazy that he didn’t start from game one, but going into Super Regionals, he’s not really freshman anymore. Ole Miss needs Nikhazy as much as they need Thomas Dillard, Grae Kessinger and Will Ethridge.

As the season progressed, Nikhazy said he was able to find a groove that worked well for him – not necessarily what to do in-game, but how to handle the down time between starts. He singled out his bullpen sessions and his work ethic in-between outings as the points that helped his growth on the mound as the season progressed.

“At the beginning of the year he was coming out of the bullpen. I always knew he was a good arm, but it used to be me having to guide him through it a little more. Reminding him to make certain adjustments that clicks for him, just helping him get through it in any way possible,” said Ole Miss junior catcher Cooper Johnson after Nikhazy’s start in Regionals. “Now, I look back at tonight’s game, and I was just kind of along for the ride. I was just back there setting up and he was hitting the spot.”

Now, with the season in its most critical moments, Doug Nikhazy has been at his best. His best two starts have come in his last two – at Hoover, Ala. for the SEC Tournament and home in Oxford in the NCAA Tournament.

Nikhazy shut down Texas A&M in Hoover, throwing eight scoreless innings and surrendering three hits. He then turned around and threw another eight innings this past weekend against Clemson, allowing four hits and one run while striking out nine.

Getting the best from Doug Nikhazy couldn’t possibly come at a better time. With the team traveling to Super Regionals this weekend at Arkansas, the Rebels are already in rarified, thin air that no one on this team has ever reached. And they’re trying to keep climbing that mountain to Omaha, just two wins away from reaching the College World Series for the first time since 2014.

The good news for Ole Miss: Nikhazy has had success against the Razorbacks. In his second SEC start, he went 5.2 innings and allowed three runs in a game the Rebels won in March. Since that start, Doug Nikhazy is 6-1.

Alice in Chains, slacklining and cliff jumping aside, Nikhazy is different. But Ole Miss needs him to be his same, reliable self in Fayetteville on Sunday.