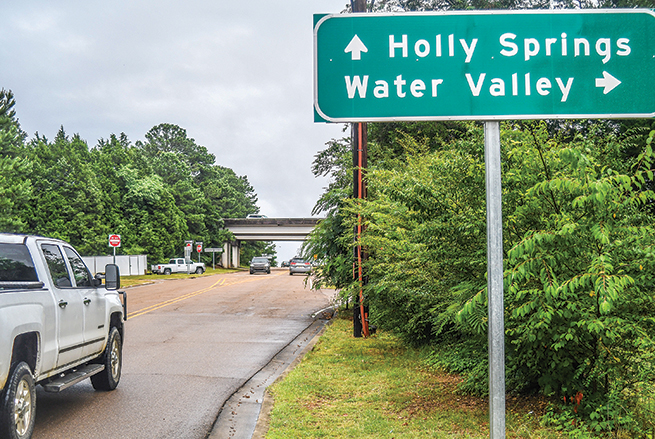 On Tuesday the Oxford Board of Aldermen approved closing Sisk Avenue between Ridgewood Manor Drive and Enterprise Drive for construction at the Highway 7-Sisk Interchange, in Oxford, Miss. on Thursday, June 6, 2019. (Bruce Newman, Oxford Eagle via AP)

After several actions were taken during Tuesday’s Board of Aldermen meeting, construction of roundabouts at the Highway 7 and Sisk Avenue exit are slated to begin this month.

The Board first discussed a Memorandum of Agreement between the City of Oxford and the Mississippi Department of Transportation. MDOT owns the roadway, but requests the city foot the bill for a roundabout. In the agreement approved by the Board, the developer, Oxford Commons Improvements, LLC., will begin the construction at the interchange as soon as MDOT approves a permit for the work within its right-of-way. At the request of MDOT, the city asked to enter into the MOA before issuing a permit.

David Blackburn of Oxford Commons Improvements will pay for the roundabouts, which will cost around $11 million dollars. A Tax Increment Financing bond will fund the project. Once construction around Oxford Commons is completed and enough taxes have been accrued by people occupying the new buildings, the city will sell the bonds and reimburse Blackburn.

The City made this decision in order to get construction underway and comes after Mayor Robyn Tannehill sent a letter to MDOT officials on Monday. She sent the letter in effort to obtain MDOT’s help funding the project and to protest MDOT’s request that the City be responsible for maintaining roundabouts on a state-owned roadway.

“This is all on MDOT roadway. This is not city streets, this is not privately owned property,” Tannehill said during the meeting. “This is a project that we are moving forward on. We are very blessed to have a developer, David Blackburn, who is willing to enter into this project with us to help us do improvements and construction on an MDOT roadway. …Not only is the developer fronting the expense, you the taxpayers of Oxford will pay for this over the next 20 years. I think this is a very unfair way to treat the citizens of Oxford.”

The project will consist of two roundabouts at each exit on Sisk Avenue. The first phase of construction will begin later this month and include shutting down the southbound ramp off Highway 7 to traffic. It will also close Sisk Avenue between Ridgewood Manor Drive and the northbound ramp. This phase will take about a month to complete the construction of the first roundabout.

A second phase of this project will begin in July and will affect the northbound ramp to Highway 7 to allow the construction of the second roundabout at the intersection of Ed Perry Boulevard and Sisk Avenue. During this phase, Sisk Avenue will be closed between Ridgewood Manor Drive and Enterprise Drive.

People attempting to get to Malco Oxford Commons or other businesses off Sisk Avenue should take the Highway 30 exit and use the Oxford Commons Boulevard frontage road. City engineer Reanna Mayoral said construction of the Sisk Avenue Extended roadway should be completed by mid-July, which would help with traffic flow and allow teachers to get to Oxford High School and Della Davidson Elementary.

“It is something though that we know our community needs,” Tannehill said. “We’re just in that bind. MDOT is not going to do anything and for development to continue, this is the way we serve our community and help Oxford continue to grow with the needed infrastructure in place.”

The Board approved the closure of Sisk Avenue in two stages in hopes to get the project completed before school begins on Aug. 7. They also approved extended work hours, including Sundays. Construction hours will not be extended near Ridgewood Manor Drive and the residential area, per a request of Alderman Rick Addy.

Avent Acres gets Board approval for nomination