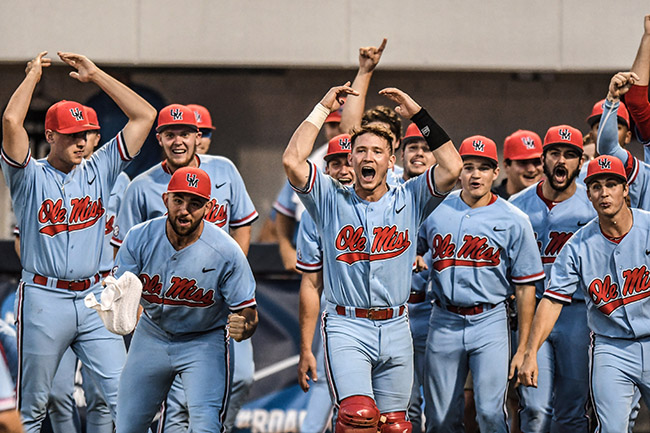 For the first time since 2014, Ole Miss will play Saturday in a NCAA Tournament Super Regional. However, it’s a little different than a standard trip to the supers – it’s an all SEC West supers.

When Ole Miss takes the field in Fayetteville, Ark., they’ll be doing so against a Razorbacks team they’ve already played five times this season. The Rebels played a three-game series at Arkansas back in March before seeing them twice in the SEC Tournament just a few weeks ago.

And there’s a huge advantage to that. To not have to learn where you’re going or figure out how the ball bounces on the turf and infield is critical.

Baum-Walker Stadium at Arkansas is right up there with Oxford-University Stadium as far as capacity and environment, and the Rebels are used to playing there. In a way, Zabowski said, environments like here in Oxford last weekend prepare them for playing at Baum-Walker.

“I think it’s playing at Swayze (Field) that helps us play there. Just because there’s so many people that come out to Swayze and we pack it out all the time that we see the big crowd. We’re not really intimidated by it,” Zabowski said. “We’re used to it. Baum will be similar to Swayze. They won’t be rooting for us, but we can handle it.”

Ole Miss head coach Mike Bianco scoffed a little bit at his junior’s statements. Because it really is so, so different between playing at home in front of a loud crowd and playing on the road in front of one.

“I don’t know exactly what they mean by that. It’ll be different because those 10,000 fans will be against us,” Bianco chuckled. “I think they just mean it’ll be an electric environment with a lot of people and really loud. That’s one of the neat things about college baseball. But they’ll be wearing a different shade of red and I don’t think there will be showers out in left field if we hit a home run.”

Regardless of stadium effect, Ole Miss has had remarkable success playing at Arkansas of late. The Rebels beat Arkansas two games out of three in their regular season series earlier this year at Baum-Walker Stadium. And they’re success at Arkansas dates back past just this season.

It’s a little strange to get a team in the Super Regionals that you’ve played as many times as Ole Miss has seen Arkansas. This weekend will represent games six, seven and potentially eight between the two schools. Ole Miss holds a 3-2 record over the Razorbacks entering the series.

Facing a team so much presents a lot of positives, but those themes work in both directions.

“As a hitter, you’ve seen all their guys on the mound. You kind of have an idea about how they’ll attack you,” said junior Grae Kessinger. “It’s the same thing for them, but yea we’re familiar with them. It’s fun and you kind of get to know those guys – it’s exciting.”

Zabowski joked that they’re about as familiar with Arkansas that they know their middle names at this point.

It’s an aid more for the hitters than the pitchers. When Will Ethridge takes the mound Saturday, it will be just the second time he’s seen Arkansas. The same will be true for Doug Nikhazy on Sunday. But if it comes down to it, Ole Miss’ third starter Gunnar Hoglund has seen the Razorbacks twice already. Both Hoglund starts against Arkansas came in wins.

The Ole Miss and Arkansas NCAA Super Regional series will get under way Saturday at 11 a.m. Central Time. Saturday’s game one is televised on ESPN, while game two on Sunday afternoon is on ESPNU. If it comes down to it, Monday’s winner-take-all game three will be at 3 p.m. on ESPN2.