Ole Miss’ recipe to come from behind in Arkansas Super Regional 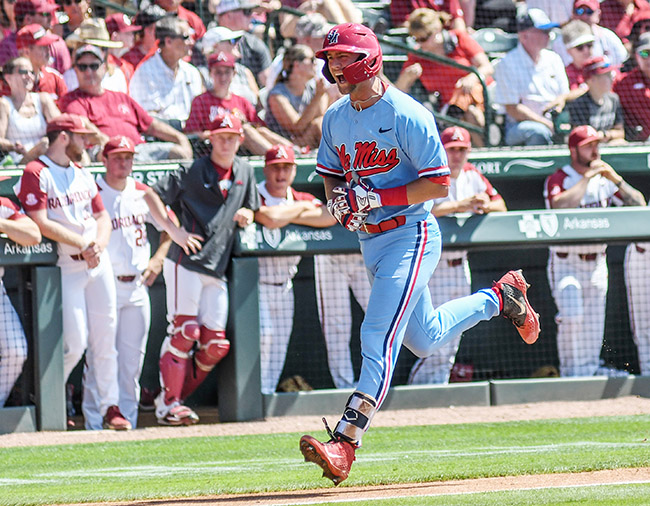 FAYETTEVILLE, Ark – Saturday afternoon at Arkansas was a disaster scenario. The Razorbacks jumped on Ole Miss and Will Ethridge early and never looked back, winning 11-2.

But here’s the thing, as ugly as Saturday was, it’s not all bad. Ole Miss trails the series 0-1, but intentionally set themselves up well moving forward. The core four Rebel relievers – Houston Roth, Zack Phillips, Austin Miller and Parker Caracci – were all deliberately not used when Ole Miss fell behind early.

It’s not an easy road to walk, but there’s certainly still a path for Ole Miss to come back and win this series in three games. Here’s that recipe.

Doug Nikhazy has simply been special in his two postseason starts. The freshman lefty will start Sunday for Ole Miss, coming off back-to-back eight inning starts where he surrendered a combined one run. It’s unfair to expect eight scoreless innings from the freshman on Sunday. But they’re going to need Nikhazy to be superb to have a chance to extend the series into Monday.

He has started at Arkansas before, going 5.2 innings and giving up just three runs to the Razorbacks in an Ole Miss win back in March. That was only Nikhazy’s second SEC start. Now, he’s arguably the lynchpin to this series moving forward.

2. Limit power hitters at the top of the Razorback lineup

Arkansas’ one through four hitters were simply dominant Saturday afternoon. The grouping of Trevor Ezell, Casey Martin, Matt Goodheart and Dominic Fletcher hit 9 for 18 and accounted for seven RBIs in the game. Of the three homers hit, they accounted for two. And it could have been worse.

Goodheart hit a bomb that landed just foul in the first inning. It would’ve been a three-run shot. Ezell had a potential homer robbed late in the game by Ryan Olenek. Those four batters very easily could have hit five home runs.

Ole Miss needs to find answers against the top of the lineup to have success moving forward.

3. Get length out of Gunnar Hoglund on Monday

The Ole Miss freshman has been very hot and cold on the season. Hoglund is often fantastic going through a lineup for the first time, but going through an order the second time has been simply miserable. Hitters are batting over .600 against Hoglund the second time they see him in a game – the reason ten of his starts haven’t even gone five innings.

The positive here is that they didn’t go deep into the bullpen on Saturday, saving a lot of arms for the next two days if Hoglund is to struggle early. However, if the series gets to Hoglund on Monday, he’ll need to be better the second time through a lineup.

The magic has run out. It’s over.

Coming into the weekend, Ole Miss has worn the powder blues in the last ten games. They were 9-1 over the stretch, with the only loss coming in the SEC Tournament Championship game to Vanderbilt – a game where they scored 10 runs in a loss. It sort of became a mystical feeling when the Rebels donned the powder blue.

After an 11-2 drubbing at Arkansas on Saturday, that ship has sailed. Hopefully Ole Miss brought a different uniform, because it’s time to move on.

Saturday was rough. A fluke of a miserable outing from Will Ethirdge spiraled into a disgusting thrashing that seemed to never end. But it’s not the end of the story. Ole Miss is still very much alive. They just have to win two more baseball games in a row, something they’ve done plenty of times this year. There’s a lot of baseball left to play in Fayetteville.