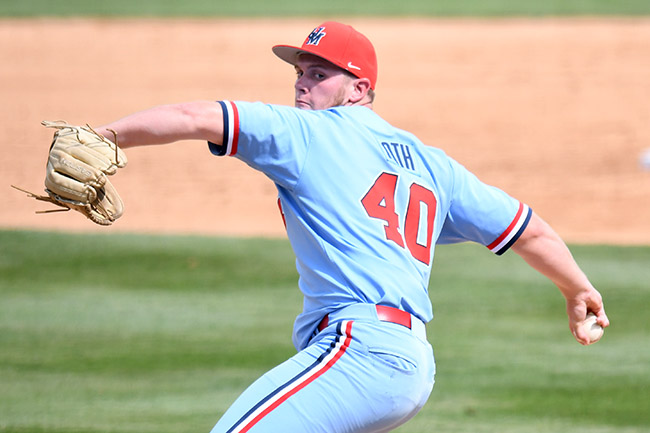 Ole Miss' Houston Roth pitches against Arkansas in an NCAA Super Regional at Baum-Walker Stadium in Fayetteville, Ark. on Sunday, June 9, 2019. Roth didn't give up a run in four innings of relief. (Bruce Newman, Oxford Eagle via AP)

The plan was never to fall down 0-1 and get dominated in the Super Regional opener. But after things got out of hand early on Saturday, the position Ole Miss is now in after punting on the first game is exactly what you envision.

Ole Miss won game two of the Super Regional against Arkansas 13-5, setting up a winner-take-all game on Monday with a trip to the College World Series on the line.

And the situation for the Rebels is just about textbook. By punting on the game one loss, Ole Miss was able to save their top four relievers for the final two games. Sunday, they used just one bullpen arm after getting a fantastic 4.0 innings from Houston Roth.

Going into the winner-take-all, Ole Miss is sporting a fresh Zack Phillips, Austin Miller and Parker Caracci. It’s a rare feat to have those kinds of options on day three of a Super Regional. But it’s one set up by Bianco’s plan and some competent relief work Saturday from some unexpected names.

“They let it not get too embarrassing for us (on Saturday). But now we go into game three with (Austin) Miller having not pitched yet and, of course, (Parker) Caracci,” Bianco said. “But (Matt) Cronin hasn’t pitched for them either. They’ve got a bunch of guys over there that haven’t pitched either. It should make for a really good game tomorrow.”

As he has all year, Gunnar Hoglund (3-2, 4.64 ERA) will start in game three against Arkansas’ Patrick Wicklander (6-2, 4.29 ERA). Behind the two starters, both schools have just about any bullpen arm they want at their disposal.

At this point of the year, you want the best team to advance to Omaha and not have situations decide Super Regionals. That is what we will have in game three of the Fayetteville Super Regional. One game with everything in play and just about everyone available.

An added plus for Ole Miss is simply how often they’ve been in this place this year – and how well they’ve played. The Rebel team has been sensational with their backs against the wall. In Hoover during the SEC Tournament, the team went 4-1 in elimination games. They won four straight elimination games before the loss to Vanderbilt in the championship.

“We’ve played our best (in these moments). Kind of the mantra to the postseason is that ‘we don’t know what tomorrow is going to bring,”’ said freshman pitcher Doug Nikhazy said after Sunday’s win. “We have to do our jobs today. We can’t look past today and we weren’t ever content with what’s going on.”

One more game. It all comes down to tomorrow. After 67 games to this point, only one more matters. Ole Miss (41-26) and Arkansas (45-17) will square off in game three of the Super Regional Monday at 3 p.m. A trip to the College World Series is on the line. For Ole Miss, tomorrow simply comes down to execution, because the plan to this point has been nothing short of spectacular.