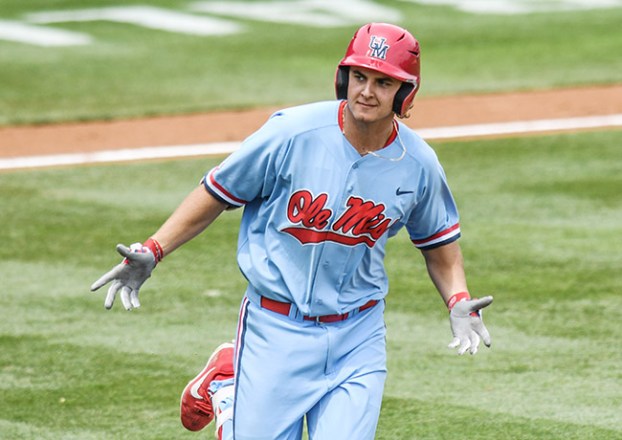 FAYETTEVILLE, Ark. – As it turns out, Ole Miss really prefers days at the plate when they don’t have to face Isaiah Campbell.

A day after recording just five hits in an 11-2 loss to Arkansas to open Super Regional play, Ole Miss bounced back in a strong way in game two, recording 12 hits in an 13-5 beatdown of the Razorbacks. The Fayetteville Super Regional is heading to a winner-take-all game three.

“Usually on Doug Day, we talk about Doug (Nikhazy). But it was really about the offense,” said head coach Mike Bianco. “It started with (Zabowski) with a huge home run after they got two in the first inning, which was big. Then we were able to extend it with homers.”

What is usually a minor detail in the grand scheme of a game became a major factor Sunday at Baum-Walker Stadium. The wind blew out for a big portion, if not all of the game. Batted balls that typically result in lazy fly outs carried to the warning track and warning track hits carried 400-feet.

After falling down 2-0 in the first inning behind a home run from Dominic Fletcher for Arkansas, Cole Zabowski needed only a handful of minutes to put Ole Miss on top. Zabowski’s three run home run would have carried out of the park regardless of the conditions, but with the wind blowing into right center field, the ball appeared to travel half-way back to Oxford. (Bad joke – my apologies).

“The pitch was a changeup. The pitch before that was also changeup,” Zabowski said. “I’m just trying to hit the ball hard. The good part about the wind blowing out, is if you miss it a little bit, it can still go.”

Not to be outdone, Cooper Johnson, Tyler Keenan and Grae Kessinger would also hit homers in the game. Additionally, Keenan hit. a bases clearing, three RBI triple in the second inning to put Ole Miss up 7-2. He drove in four runs on the day.

As great as the Rebels were hitting moon-shots, they were just as good at setting them up. Ole Miss drew eight walks on the night, six off of Arkansas reliever Kole Ramage. Five of the eight batters to walk would later score. In the process of drawing walks, Thomas Dillard drew two on the day, breaking the Ole Miss single-season record in the process with 60 on the year.

11,029 Razorback fans were in attendance at Baum-Walker Stadium for Doug Day. While far from the young lefthander’s best performance of the year, Doug Nikhazy did enough to turn the tables on the series. The Ole Miss freshman needed just five innings of work to strike out eight batters.

With his 82nd strikeout of the year in the fourth inning, Nikhazy broke the Ole Miss freshman record, passing Jeff Calhoun and Drew Pomerantz.

Nikhazy was credited for five earned runs, but really just ‘earned’ three of them as a lazy pop-up in the first inning landed between Cole Zabowski at first and Jacob Adams at second. Following the blunder, Arkansas hit a homer on the next at-bat to take an early 2-0 lead.

“I think he would admit that it maybe wasn’t his sharpest day with all his pitches. But it was a gutsy performance,” Bianco said. “That’s why (Doug) is so good. There’s days where he’s not as sharp stuff-wise, but he’s always able to make a pitch and get off the field. He did that today.”

With the win, the Rebels force a game three of the Super Regional with a trip to the College World Series on the line. One day after looking dead in the water, an Ole Miss trip to Omaha is still very much alive. Monday’s game is at 3 p.m. on ESPN2 with the time subject to change.

Ole Miss’ recipe to come from behind in Arkansas Super Regional

FAYETTEVILLE, Ark – Saturday afternoon at Arkansas was a disaster scenario. The Razorbacks jumped on Ole Miss and Will Ethridge... read more