The Powder Blue Magic ran out Monday in Fayetteville, but the Rebel run to Supers is worth remembering 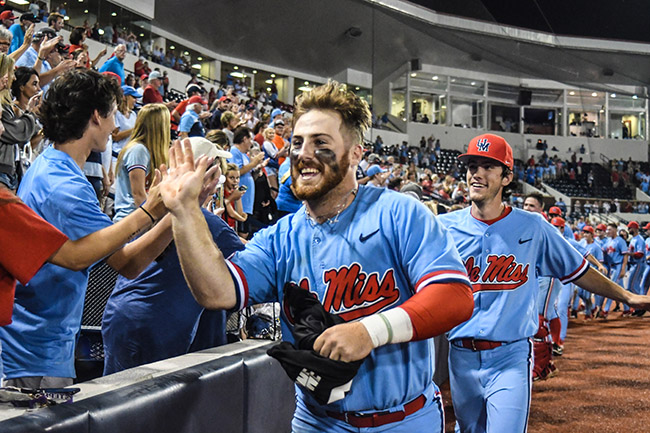 Mississippi players Thomas Dillard celebrates a win over Jacksonville State in the NCAA Oxford Regional at Oxford-University Stadium in Oxford, Miss. on Monday, June 3, 2019. Mississippi won 19-4 to advance to the Super Regionals and will face Arkansas. (Bruce Newman, Oxford Eagle via AP)

It’s a team that beat – in dominant fashion – some of the best in the SEC. But it’s also a team built around four players drafted in the first six rounds of the MLB Draft that happened to lose to North Alabama (16-38) and Arkansas State (26-29). In a way, junior left fielder Thomas Dillard described the team best.

“‪My freshman year we weren’t a very good baseball team. We competed in some games just because we were talented. Last year was probably the best team I ever played on. It seemed like every game we played in we were in,” Dillard said. “This year was kind of a mix of both. We went through periods where we were really dominant, and we went through periods where it looked like we never picked up a baseball.”

The Arkansas State loss came in the middle of the lowest stretch of the year. Going into their regular season finale at Tennessee, Ole Miss had lost six games in a row. The stretch started in Oxford when they were swept by Mississippi State, before losing at to Arkansas State and the first two games in Knoxville.

Ole Miss was a fish out of water at the time. A corpse walking with a fan base growing ever frustrated and unsatisfied, Ole Miss threw on the powder blues Sunday at Tennessee. From that point on, everything changed.

The Rebels won their regular season finale 5-4 at Tennessee, getting the monkey off their back before the trip to the SEC Tournament. In Hoover, they won four straight elimination games before falling to Vanderbilt in the SEC Tournament championship game. All throughout that stretch, for every win they donned the powder blues. It got to the point where you could tell they all thought it was sort of silly, but they sure weren’t going to a different uniform. The mood on the team had shifted.

Earning a host seed following the run in Hoover, the Rebels peaked at home in the Oxford Regional. They had never been better. Scoring 41 runs in three games and wiping the floor with every team that even attempted to hang with them, the Rebel team was finally playing to their potential. Maybe even better.

“Three weeks ago, nobody thought we’d be here,” said head coach Mike Bianco. “There were some weekends when we were as good as any team in the country. There were some weekend’s we’d like to forget. But they hung together and we came one game away from making it to Omaha… We played well in Hoover. We played super last week at home and we just came up one game short.”

Unfortunately, the road came to an end in Arkansas. It’s a team Ole Miss had played well against – the teams actually split the season series 4-4 – but couldn’t muster enough down the stretch.

The team got shelled to open the supers and bounced right back in game two with a dominating performance of their own. Coming into Monday, they were just one game away from their first trip to Omaha since 2014 and the program’s second appearance since 1972.

Despite the ugly 14-1 ending to the season, the team is still more than capable of processing just how special these two weeks have been.

“Overall, I’m just proud of where we are right now. No one really thought we’d be in the last game of a Super Regional a few weeks ago. We had a six-game losing streak and lost to Arkansas State in there, but we turned it on when we needed too,” Dillard said. “The SEC Tournament, Regionals and Super Regionals, I think we looked like a different team than we were all year.”

In a vacuum, it’s not the ending Ole Miss fans wanted. And rightfully so – coming so close makes the fall all the more painful. But you can’t forget just how special the run to get to this point was.

The Season Finale: Ole Miss blown out in Super…