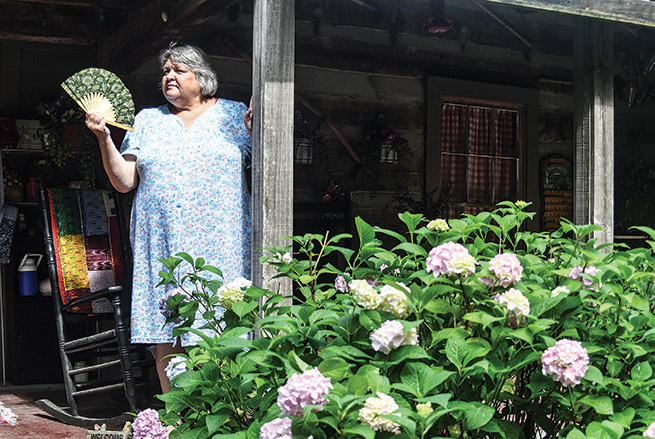 Susan McPhail prepares for a scene while working on the Oxford Film Festival's community film "The Golden Years" in Oxford, Miss. on Friday, June 7, 2019. (Bruce Newman, Oxford Eagle via AP)

When Joe Starzyk heard his script read during this year’s Oxford Film Festival, he knew the perfect place to make the film come to life.

His decision to do his short film in Oxford also made the decision of what next year’s community film should be. Everything fell into place in February when Starzyk attended the festival because his script won the short screenplay contest.

The eighth community film is titled ‘The Golden Years’ and stars Oxford’s most well-known film couple, Johnny and Susan McPhail. The film takes place in a home that is very special to those involved in the Oxford Film Festival. The project consisted of a three-day shoot that took place over the weekend.

“You look at a lot of different festivals online and (OFF) was one that I’d read about and what the possibilities are if you win and I thought ‘geez, that sounds great,” Starzyk said. “It wasn’t until I got here in February and saw how well-run a festival it is and how much they take care of the participants. Everybody working the place was so nice.”

Upon winning the screenplay contest, Starzyk’s script was performed as part of a live table read during the festival. This was one of the first screenplays Starzyk had written, who is a playwright out of New York City.  This film will be the first to have a screenplay written by someone who is not a local to the Oxford area.

“I didn’t start screenwriting until about the latter half of last year,” Starzyk said. “I figured tackling short screenplays was probably the way to get my feet wet and start to learn about the difference between writing for one and writing for the other. So, I began adapting some of (my) plays.”

The story centers around a married couple who have been together for decades until one day the wife decides to tell her husband she is leaving him. From there, the story takes off with a blend of comedy and dramatic themes. The McPhails were selected to read the parts, which turned into an impromptu casting call for Starzyk. After watching the couple bring his words to life, Starzyk knew they were the perfect pair for his film.

“(Starzyk) is an incredible writer and we’d read some of his other work,” Johnny McPhail said. “It’s almost a joke in every line if you play it right. Susan and I did the reading and evidently we were auditioning for the part.”

The majority of the film is shot on the porch of the couple’s home with a couple interior scenes as well. The community film always shoots on location, and it did not take long for the right perfect location to present itself. Neil White’s property, a couple miles southeast of Oxford, was selected as the home.

Shooting at White’s house sort of brings things full circle for the festival as White was one of the founders of the Oxford Film Festival in 2003.

‘The Golden Years’, which is also the first community film to be SAG-Aftra, will make its world premiere during the 17th annual Oxford Film Fest next year. The festival has been pushed back a month and will run March 18-22, 2020.