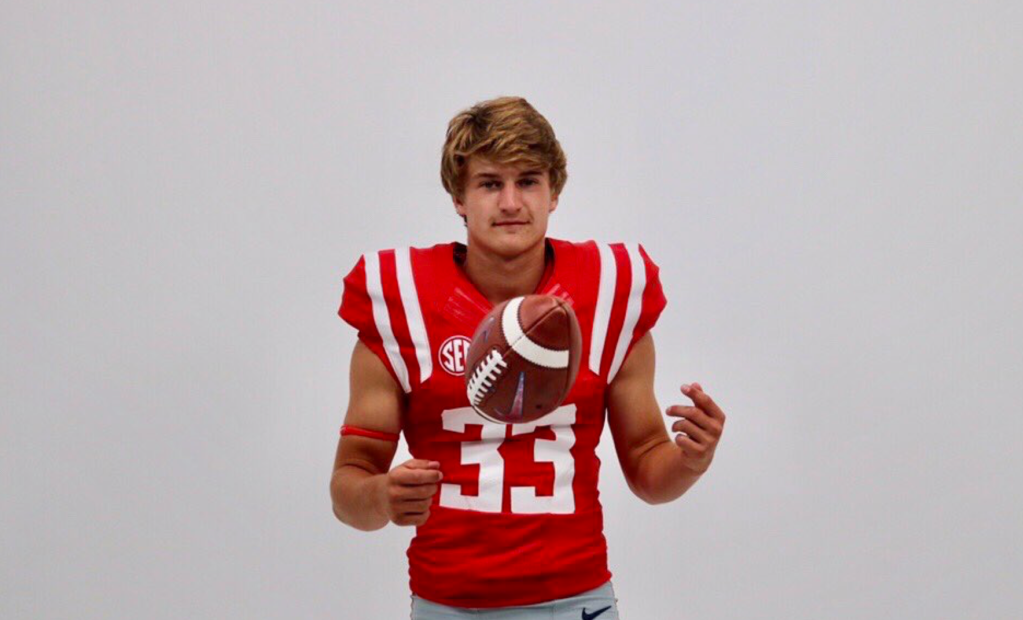 A string of nine Ole Miss football commitments in nine days was capped Wednesday by a player pretty well known in Oxford circles.

Kicker Jack Tannehill from Oxford High School, son of Oxford Mayor Robyn Tannehill and her husband Rhea, committed to Ole Miss on Wednesday afternoon via a statement on Twitter.

“It really is one of the best campus’ in the nation. It’s beautiful and I’ve grown up going to every Ole Miss home game,” Tannehill said. “the coaches are awesome and they’re super nice. There’s nothing wrong with Ole Miss – it’s just perfect.”

A rising junior, Tannehill will be part of the Ole Miss recruiting class for 2021. As a sophomore at Oxford High School, he converted on 11 of 15 field goal attempts with a long of 44-yards. He went 28 for 28 on extra points attempts.

According to Khol’s Kicking, a college recruiting database for kickers and punters, Tannehill is the No. 25 rated kicker in nation for the class of 2021. He’s noted as “one of the cleaner ball strikers in his class.”

Growing up a fan of the school makes the recruitment process much easier for Matt Luke and Co. But while Tannehill grew up a fan of Ole Miss, living in Oxford, he knew going to the school wasn’t a given, regardless of talent. When the opportunity presented itself, it was too good to pass up.

“Of course I didn’t just know I was going to Ole Miss,” Tannehill said. “But being an Ole Miss fan my whole life, I knew the whole time that it would be super special if I got the opportunity to go there.”

His decision comes early. Just a junior, Tannehill still has two more years of high school football to play. He can’t sign his letter of intent to play at Ole Miss until the early signing window in December 2020. But for Jack Tannehill, committing early was just the easy thing to do in his position.

“Recruiting for Kickers is just way different than recruiting a linebacker or a wide receiver. If you don’t find your spot you’re going to lose it,” Tannehill said. “To me, a scholarship to Ole Miss was too special to lose.”

For Ole Miss, Tannehill’s commitment is one in a string of wins for the Rebels of late. Tannehill is just the second player from the class of 2021 to commit to Ole Miss, but the ninth player overall in nine days.

In the eight days prior to Tannehill’s commitment, Ole Miss received verbal commitments from seven three-star players and one four-star player, all from the class of 2020. There are now 13 total players in the high school class of 2020 committed to the Rebels.