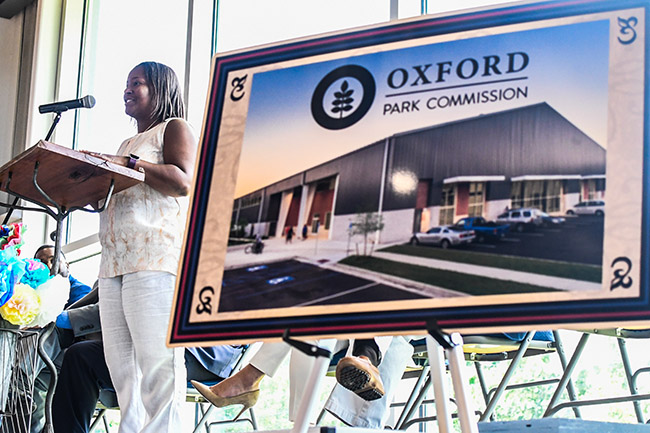 A seven-year endeavor that began as an idea in a November 2012 Board of Aldermen meeting saw its culmination this week.

The Ulysses ‘Coach’ Howell Activity Center had its grand opening and naming ceremony on Wednesday, with several Oxford and Lafayette County officials in attendance.

The center opened in January to allow the completion of the Oxford Park Commission’s basketball season, with the rest of the building opening in February. The grand opening coincided with the naming of the center in honor of the late alderman who passed away last month. The Oxford Board of Aldermen approved a recommendation to name the activity center after Howell during their May 21 meeting.

Howell’s family, including his daughter Kesha Howell-Atkinson, was in attendance. Howell-Atkinson is running in next month’s special election to fill the Ward IV alderman seat her father occupied for 26 years. She spoke during Wednesday’s ceremony on behalf of the Howell family, expressing their gratitude.

“I know he’s smiling huge in Heaven,” Howell-Atkinson said of her father. “I know he’s very proud of this center and having his name on it. I just want to thank everyone in this building for all your help and support.”

The 46,000 square foot facility includes two basketball courts, which can also serve as volleyball and pickle ball courts, a walking track on the second floor above the courts and a new gymnastic room that opened this week. The building was the brainchild of former Oxford Mayor Pat Patterson, who charged the Board at the time of getting the city a new activity center.

Seth Gaines, OPC director, thanked all his current and former staff as well as the OPC Board for getting the city a new place that all members of the community can enjoy.

“There were so many people who played a roll (in getting the center built),” Mayor Robyn Tannehill said. “It has come to fruition on my watch, but I want to say ‘Thank you, Pat for your roll in providing this fine facility for our community.’ Of all the city services and buildings that our citizens have access to, this activity center is perhaps the building that serves the most diverse groups of people. …Ulysses ‘Coach’ Howell was an incredible leader, and incredible mentor and an even better friend. He was committed to treating everyone fairly and he was passionate about the youth of this community.”

The activity center is open seven days a week with the exception of major holidays. For more information, visit http://oxfordparkcommission.com or call 662-232-2379.