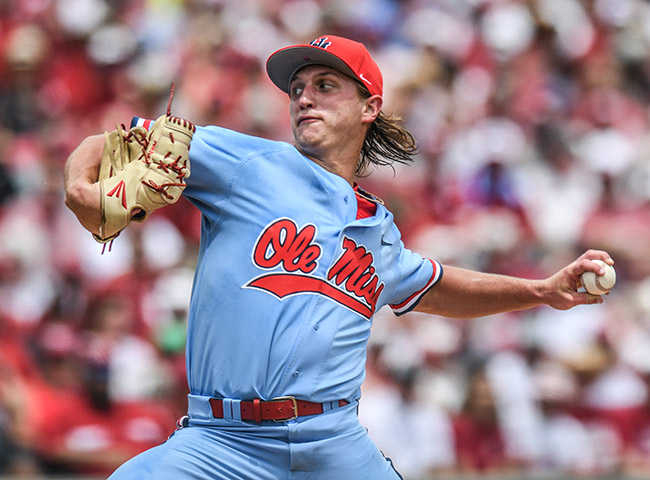 After an outstanding freshman year, starting out of the bullpen before transitioning critically into the weekend rotation, Ole Miss pitcher Doug Nikhazy was named a Perfect Game Freshman All-American on Thursday.

The freshman from Windermere, Fla. started every game two in conference play for Ole Miss. The phenomenon of Doug Day, as it began known on social media, spread with each impressive performance from the youngster. Now, Doug Day is earning national accolade.

Nikhazy moved to the weekend rotation, after starting the season in the bullpen, just before SEC play began. During his first start in conference, he took a no-hitter into the seventh inning on the road. In that game at Missouri, he would throw 7.2 scoreless innings. Ultimately, that first conference start was just a glimpse of what was to come.

“Going into the spring, Doug was one of the maybe five candidates that could start on the weekend,” said Ole Miss head coach Mike Bianco. “We went in a direction with some of the older guys, but you could see it (with Doug). Out of the bullpen down in Tulane and some of the other tighter outings where he was terrific. But we thought we needed some help on the front end of games.”

That help on the front in came in the form of Nikhazy. It was move that changed both the direction of the Ole Miss season and potentially Nikhazy’s Rebel career. Bianco called the move “stabilizing.” The numbers sure back it up.

This past weekend in the Super Regionals, the only game the Rebels won came on Doug Day. Nikhazy allowed five runs over five innings on the mound that day, but stabilized the Rebels in a series punctuated by gaudy run totals.

On aggregate, the statistics for Nikhazy’s freshman year are fantastic. He went 9-3 as a starter, posting an ERA of 3.31. Along the course of the season, he set the Ole Miss single season strikeouts mark. Striking out 86 his freshman year, he broke a record previously held by Drew Pomeranz and Jeff Calhoun. In SEC play he went 5-2 with a 3.44 ERA, remarkable numbers for a freshman.