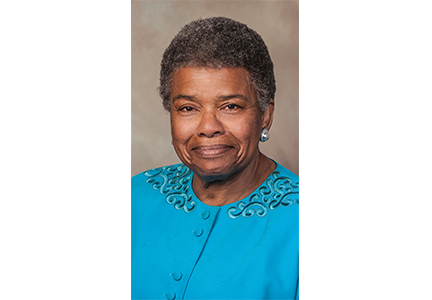 Constance Slaughter-Harvey lives by one rule: To whom much is given, much is required.

As the first African-American woman to graduate from the University of Mississippi School of Law, Slaughter-Harvey has done just that. She began practicing law upon completion of classes in January 1970, throwing herself full-force into the courtroom. She was so dedicated to helping others, she said, that she missed her own commencement ceremony in May 1970.

The first case Slaughter-Harvey, a Forrest, Miss. native, worked on was the criminal trial of Civil Rights Activist Rev. John Perkins, which was appealed to the Mississippi State Supreme Court. At the same time that case was in appeals court, she was also involved in the case of the murders of two Jackson State University students.

“We were filing lawsuits regarding redistricting the state of Mississippi, as well as quite a few cases involving police brutality against African-American males at that time,” Slaughter-Harvey said. “So, I don’t even remember graduation, because I was so full with doing what I had always wanted to do. And that is to make certain that Mississippi justice is fair – and I’m still trying to do that.”

Protecting others and making sure all demographics in Mississippi are represented fairly is something Slaughter-Harvey said she’s devoted her life to, and will continue to do so.

Her work has brought to light some of the most egregious crimes in post-Civil Rights Movement Mississippi, especially concerning abuse of power among Mississippi Highway Patrolmen in the 70s and 80s.

“… Highway Patrol had a policy of terrorizing. At that time, it was synonymous with the Ku Klux Klan. They were terrorizers in the African-American community,” she said. “Now that I’ve seen the changes, almost 50 years later, there’s a black chief. He’s very fair, knows what he’s doing and color has little meaning to him. So I’m very comfortable with that. I’m thankful that I have seen some changes.”

While she’s pleased with the progress Mississippi has made in the past almost-five decades, Slaughter-Harvey said there are two things she’ll never do: lose sight of the societal changes that still need to be made, and view Mississippi as anything less than a congruous piece of the United States of America.

The two goals come together in the form of modern immigration reform. Immigrants, especially those crossing the Southern border of the country, are being treated not unlike the African-American population was in the 60s and 70s, she said. In some ways, she pointed out, Mississippi is more welcoming than others – it is the Hospitality state, after all – but in other ways, it follows suit with the “inhumane” leadership she’s seen on a national level.

“It concerns me greatly, that it’s just a repeat of those who think they have power trying to repress those who should enjoy benefits that are extended to Americans,” she said. “… As long as those individuals have been white, it’s been no problem, but now that they’re people of color, it’s a problem. That part reminds me of how we were treated, how African-Americans were treated, and it concerns me greatly.”

Although she retired from practicing law in 2011, Slaughter-Harvey is still highly active in her community. She is involved with the Scott County youth court, once again taking up the mantle for judicial equality. She also is the founder and president of Legacy Education and Community Empowerment Foundation, an organization she established with her daughter, Constance Olivia Slaughter Harvey-Burwell.

Legacy provides more than 100 students with in-school mentors, who range in vocation from retired teachers to former chemists. The organization is committed to helping parents empower their children and building confidence and leadership skills in children.

She also established a camp called CARE (Change Agents Reading Explosion), which encourages participants to read up to five books per week, and incorporates yoga, cursive writing and Spanish. Legacy facilitates monthly “Health is Wealth” meetings with parents and other individuals to encourage healthy practices, especially in those with diabetes.

At the same time, she is also working to preserve African-American history in Scott County.

One of the recent achievements Slaughter-Harvey said she was most proud of is the organization’s awarding of five $5,000 scholarships to deserving students. It’s something she’s done for 30 years, but this year, Legacy was able to increase the amount.

She also got to return to her alma mater, the University of Mississippi School of Law, to attend commencement proceedings in May. However, she wasn’t just a face in the crowd – she was the keynote speaker.

Slaughter-Harvey has a message she shares with those who wish to follow in her footsteps, especially young women.

“You will undoubtedly hear of and encounter glass ceilings – invisible barriers that limit the heights to which you can reach in the classroom, boardroom, halls of justice and the state house – but know that you have the strength and courage to join with others to experience a breakthrough that benefits the current and future generations,” she said. “Believe the impossible is possible, if you never give up working for and doing what is right and just for everyone.”