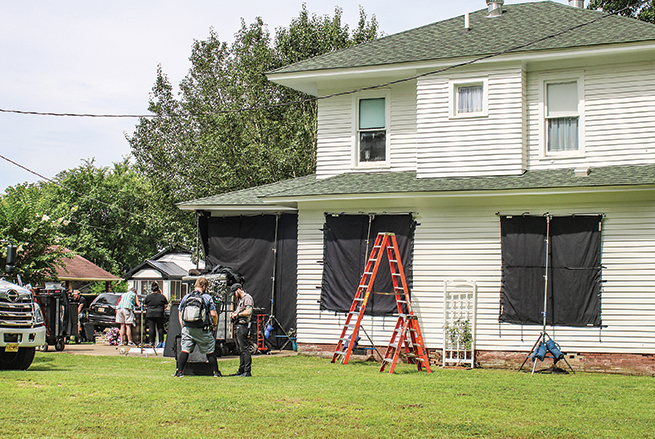 William Faulkner fans in the LOU community and those unfamiliar with his life story will soon be able to watch a documentary on Faulkner’s life that was shot in their own backyard.

A historical documentary titled “The Past is Never Dead: The Story of William Faulkner” has been shooting scenes in Oxford and Water Valley. The 10-day shoot includes several well-known locations, plus some lesser-known ones. The film will consist of interviews, archived footage as well as reenactments of pivotal moments in Faulkner’s life.

The Mississippi writer will be portrayed in three stages of his life, having three actors of different ages playing the lead role. Eric Roberts, a Biloxi native, will be portraying Faulkner in his later years.

“We’re really honored to have (Roberts),” director Michael Modak-Truran said. “With Faulkner, there’s a lighter side where he would joke around and a darker side. He struggled with alcohol and a lot of demons and I think Eric’s range of abilities is able to capture both of those worlds.”

Roberts has over 500 film credits, including recurring roles on “The Young and the Restless” and “Suits.” He also starred in the 1985 film Runaway Train, which earned him a nomination for an Academy Award for Best Supporting Actor. His sister is actress Julia Roberts.

Principle shooting is in Oxford, with Rowan Oak, The Chancellor’s House hotel and City Hall serving as the more prominent locations. Private residences in Oxford also served as filming locations.

“We’ve been really lucky with the support of the community,” Modak-Truran said. “Everyone has kind of really rallied around the project, which is helpful given what we’re trying to do with the budget level that we have.”

Production is scheduled to wrap up next week and the editing process will begin shortly after. A distributor has not been decided, but Modak-Truran said he hopes PBS and other outlets might be interested in the project.