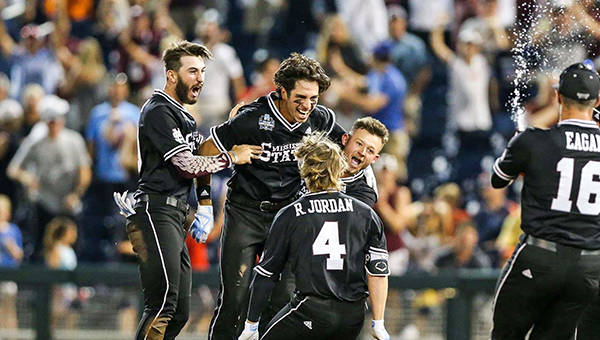 It was an unlikely, improbable ninth-inning rally with a couple of bizarre and memorable plays resulting in a win for Mississippi State.

Let us know if you’ve heard this one before.

Marshall Gilbert’s walk-off RBI single capped a four-run rally for the Bulldogs that gave them a 5-4 victory over Auburn in the opening round of the College World Series on Sunday night.

It was their 28th come-from-behind win of the season, and fifth in six postseason games this year. It was the Bulldogs’ third walk-off win, and the ninth time they’ve scored the eventual winning run in the eighth inning or later.

“That’s just how we drew it up in the scouting report before the game is give them a lead and then try to catch them,” Mississippi State coach Chris Lemonis joked in Sunday’s postgame press conference. “I give our guys credit, we fought to the last out and just kept competing and it’s something we’ve talked about all year.”

The Bulldogs made a habit of dramatic finishes during their 2018 run to the College World Series semifinals. That team earned walk-off wins during the regional, super regional and CWS as the “Rally Banana” craze took hold.

The 2018 team had seven walk-off wins in all. This year’s squad has been more dominant — Sunday’s win was the 52nd of the season, two shy of the program’s all-time single-season record — which has negated the need for some of the late-inning heroics.

There are enough players back from last year’s squad, however, that it’s clearly still in their playbook when needed.

“I’d say that it comes from day one that we started. I’ll throw it back to the conditioning test when we all showed up and everybody had to pass it in order to get to practice and be able to work with everybody, and I said from day one, it’s kind of the point where you just can’t count us out,” Gilbert said. “There’s never a point where somebody is not locked in or somebody has not bought into what we’ve got going on.

“And I think in order for us to have that kind of grit, it takes everybody, including people that maybe don’t get to start, but at some point they’re going to have to come in and make that play,” Gilbert added, “And just having the trust that somebody is going to go out there and give everything they have and just bought into what we are doing.”

A little faith helps, too, especially with the way Sunday’s game played out. The Bulldogs (52-13) left runners on base in six of the first eight innings, 11 in all. They left the bases loaded in both the fifth and sixth innings and entered the bottom of the ninth trailing 4-1.

Then Jake Mangum led off with a double and the Bulldogs started another round of Maroon Magic.

A one-out walk and an RBI double by Elijah MacNamee cut it to 4-2. An RBI groundout scored another run but also brought about the second out of the inning.

Then came the key play in the rally. Dustin Skelton hit what appeared to be an easy ground ball to third baseman Edouard Julien. Julien had a chance to tag MacNamee, who was advancing to third, but instead sailed a throw over the first baseman’s head.

It was a devastating finish for Julien, who went from hero to goat for the Tigers (38-27). He hit a two-run home run in the second inning that traveled more than 400 feet, and also had an RBI single in the fourth inning.

“For eight and two-thirds I just thought everybody associated did a nice job,” Auburn coach Butch Thompson said. “Then we had a chance to win the baseball game — I don’t think there’s any doubt about that — and just one play away tonight.”

Gilbert had been 0-for-4 to that point, but jumped on the first pitch he saw from the hard-throwing Burns. The ball bounced high and off the glove of Burns, past the second base bag. Auburn second baseman Ryan Bliss bobbled the ball but would not have had a play anyway, and Skelton scored to give the Bulldogs a 5-4 win.

Mississippi State batted around in the inning, with Gilbert the ninth man to come to the plate.

“First of all, I was in awe by everybody that was able to get the job done before me,” Gilbert said. “It was incredible, the fact we could get to that point to where I was coming up to the plate, and all the at-bats prior to that I had kind of been a little off, missed some pitches. I kept getting encouragement from my teammates saying, ‘Keep going, keep going, don’t quit.’”