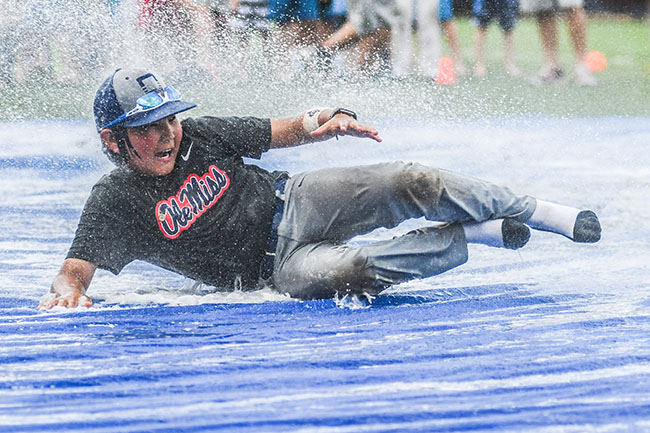 Coming off a 41-win season, culminating in a Super Regionals berth, the Ole Miss baseball coaching staff is set to take on a different group of challenges next week.

Ole Miss is hosting their first of three, four-day baseball camps, starting next Monday. Last year, the program averaged over 220 kids for each of the three sessions, geared towards development of kids in the Oxford area and throughout the south.

The annual event has become a favorite for not just the staff, but some of the Rebel players who come out and help with the camp every year.

“It’s great seeing the campers and how much fun they have participating in our daily skill and team work. But it’s also rewarding watching them get better throughout their time at camp,” said Ole Miss assistant coach Marc MacMillan, a four-year letterman for the Rebels in the 1990s who has been on staff since 2014. “Watching the teams they are assigned to develop into a team over the course of a few days along with the relationships created is really cool to see.”

As the grades are separated, skills taught are geared towards the level of the players. The only thing that’s consistent across age groupings is the ‘skill of the day.’ If the skill for Monday is hitting, then teaching it to everyone will be presented. After that, the drills and other things performed are based on grade levels.

Coach Bianco and the Ole Miss staff are hosting the camps for the 19th consecutive year. It’s something that began when Bianco took the Ole Miss job back in 2000.

“We learned from the best when it comes to camp direction, and that’s Coach Bianco. When he was at LSU, they had hundreds of kids at camp. His direction allows for an organized day of multiple drills and games along with helping coaches and players out,” MacMillan said. “Typically, we try to average a 10 to 1 ratio of participants to coaches.”

As someone the kids clearly see and look up to, Bianco is personally involved with the camps. He’s not just going to show up for opening and closing ceremonies. Bianco will be around teaching hitting, fielding and more while interacting with campers throughout the week.

In addition to Bianco and other coaches’ involvement, a handful of current and former Rebels can often be found lending a hand. Campers who take overnight trips, staying in dorms on the Ole Miss campus between camp days, are also invited to attend evening sessions – one of which includes what MacMillan tags as a ‘hot stove.’ Essentially, Ole Miss players use the session to sit down and interact with the campers and answer questions.

One of the most appealing perks of the camp is that everyone gets to spend a little time playing on Swayze Field. While the camp takes place at venues all over Oxford, from FNC Park to the Manning Center to the Ole Miss Softball Complex, everyone is ensured some time inside Oxford-University Stadium.

Online registration for the camps is ongoing and can be found at http://olemissbaseballcamps.com. They also take walk-up registration at Oxford University Stadium on Mondays at 8 a.m. for a small additional fee.